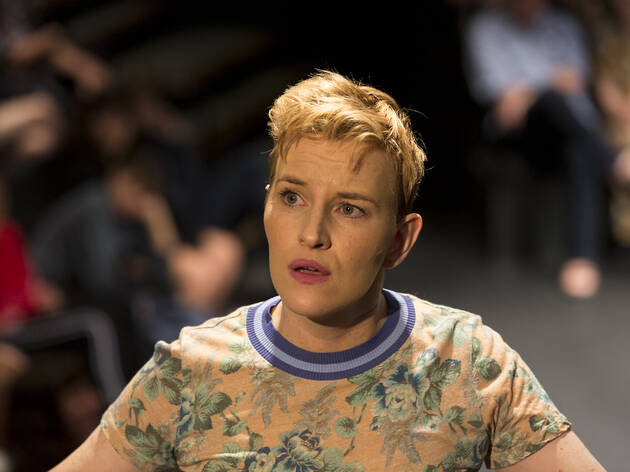 This. After a week of making bail applications, reviewing case after case of niche contract law, getting home at midnight only to leave at 7am, and surviving almost exclusively on a diet of hastily-prepared ham sandwiches and under-nourishing ice coffees, this is exactly what I needed to see.

If what you’re looking for is a sleek, high-brow, immense-production-value extravaganza akin to Mulvany’s Mary Stuart, this isn’t for you. What we have instead is the exact opposite: a down-to-earth, heartfelt, and above all else relatable story of the highs and lows of life as we know it. Mulvany, with the help of audience members she randomly selects before and during the show – though, to the best of my knowledge, no selecting of any critics 🙁 – takes us on a journey through the life of her character, from dealing with their mother’s depression as a child to the stresses of university, marriage, and beyond. The only constant force in their life is an ever-expanding list of self-proclaimed ‘brilliant things’, including but not limited to piglets, the colour yellow, sax solos (see: Careless Whispers), and every minute detail of Christopher Walken. As a means of dealing with the peaks and troughs of one’s human experiences, this list (written in its entirety on loose scraps of paper contained in several storage boxes and wheeled on stage for the audience to sift through after the performance) takes centre stage both literally and metaphorically.

All aspects considered, it’s a faultless production. Though the script gets a little cheesy at times, Mulvany demonstrates a control over both her character and the audience that keeps both forces equally engaged in each other’s stories, with her outstanding pacing and comedic timing keeping things ticking along smoothly. Her ability to read the audience and work with the energy in the room is second-to-none, particularly as the people she consistently comes back to (who adopt roles such as her husband Sam, her father, and school psychologist) are eventually accepted simultaneously as characters in the story and regular audience members. There are so many ways this metatheatricality, so crucial to the performance, can go wrong – but it simply doesn’t. That being said, you’d be perfectly within your rights to believe these are plants – everyone who has a line knows well in advance, and just manages to fit in to the show. Don’t. Seeing the absolute fear in the eyes of someone in front of me who was asked to feature in the performance five minutes before it began, they were either brilliant actors or I am a terrible critic.

That also being said, please don’t quote me as a terrible critic. I’d accept above-average. Or Indian.

Back to the performance, I must also commend the team for their addressing of mental health issues. Though it may come across as a bit underwhelming at times given the amount of humour in the show, for those that know what it’s like to go through that I can imagine this being an accessible performance. It doesn’t gloss over the issues, go too far into them, or make too many assumptions. Therefore, my utmost congratulations to Mulvany and Directors Kate Champion and Steve Rodgers for making this show, the brainchild of Englishmen Duncan Macmillan and Jonny Donahoe, even better than it already should be.

Ultimately, Every Brilliant Thing is another strong Belvoir show. No matter what your schedule’s like, make time for this. You won’t regret it.

P.S., If you’re hoping to steal the spotlight for a small moment, here are my tips: Bring chocolate. Bring a book. Wear a striped shirt. Bring your old white balding friend. Sit in the front row. Go bald. Be good-looking, tall and white. Wear a striped shirt. Finally, study the nuances and intricacies of being a human portable piano stand. It’s harder than you think.