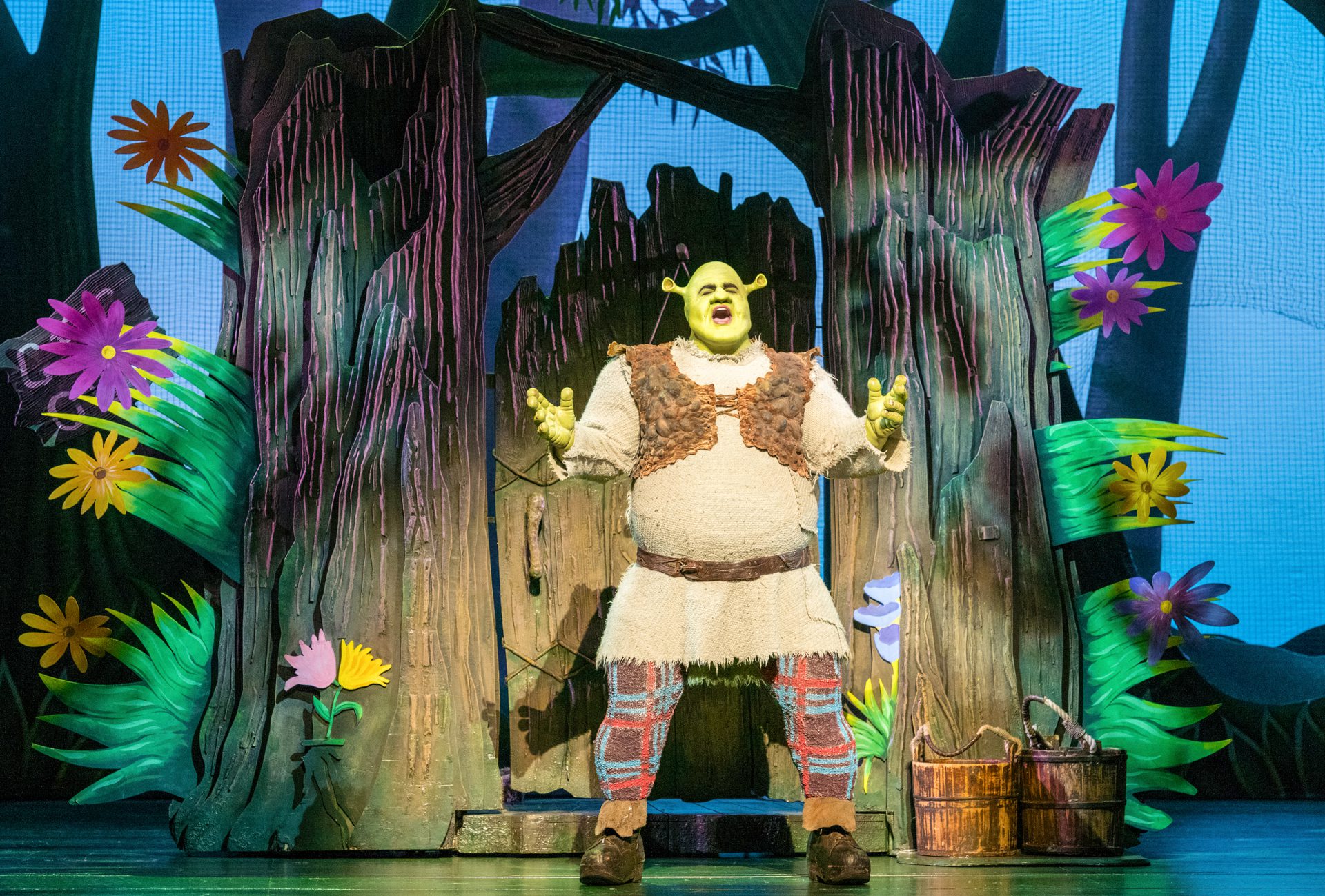 No small parts (except maybe one).

Shrek the Musical, Producer John Frost’s latest big-budget bonanza to grace the Sydney Lyric Theatre stage, is a barrel and a half of laughs. Chock-full of larger-than-life performances, world-class puppetry and a Musical Direction that needs to be heard to be believed, it is a wonderful introduction to the world of Duloc.

At the cost, however, of its inspiration’s nuances and major characters.

In a style contrasting to Dreamworks, we start not with a bang, but with a whimper. Devoid of the infamous ‘All Star‘ montage, the musical opts to begin by exposing the tragic backstories of Shrek and Fiona. We’re told they’re abandoned at a young age; missing the film’s first iconic moment, we are inclined to feel the same way.

Enter Shrek (Ben Mingay), who delivers only a lackluster ‘Get out of my swamp!‘, and the sense of abandonment only perseveres.

As a lover of the original film, it is difficult to watch the rest of Mingay’s scenes. His Shrek forces humour, crudity and dynamism, often performing his dialogue with a blankness that does not work with either Mike Myers’ or playwright David Lindsay-Abaire’s intentions. Should you be searching for the Shrek of 2001, the one loved by millions worldwide for his flawed but forgiven and undeniably human nature, you won’t find him here.

Such criticism, thankfully, does not apply (as strongly) to the principal cast.

Todd McKenney steals the show as Lord Farquaad. Performing on his obscured knees and subsequently subject to the most demanding of Jeanine Tesori’s songs, Josh Prince’s and Cristina D’Agostino’s dance numbers, and Frost’s theatrical elements of the show, his character is everything it should be – arrogant, deathly funny, and with enough jokes for children and adults alike (look out for a blink-and-you’ll-miss-it Pauline Hanson reference in the second Act). The perfect antidote to Mingay.

Adult audience members will eventually warm to Nat Jobe’s Donkey after an insignificant first Act (bar his interaction with the Dragon, a visually stunning Tim Hatley-designed puppet and vocally knocked out the park by Marcia Hines), but opinion will be mixed on Lucy Durack’s Fiona.

Stuck between portraying the frustration of searching for love (a feeling this writer shares far too strongly) and having a second-Act fart-off with Shrek in the middle of musical number ‘Searching for Love‘, the nuances of Fiona that make the acceptance of her true self and love for Shrek all the more emotional are easily lost in the need to expel body gases for cheap laughs.

The real stars of the show, however, are the fairytale ensemble cast.

Playing everyone from Pinocchio (Caleb Vines), to the Gingerbread Man (Manon Gunderson-Briggs, who nails all the character’s humour from the film plus some more), to Farquuad’s guards and even the Duloc Dancers outside Farquaad’s castle (the ‘What’s Up Duloc?‘ number easily the show’s best), I don’t think Dave Skelton’s Musical Direction has ever been better performed. They truly are the heart and soul of the performance.

Ultimately, Shrek the Musical will be initially difficult for die-hard fans of the film to stomach. Classic comic lines are forgotten, emotion is at times superseded by humour, and the old Shrek is sorely missing. But, by the saving grace of McKenney, the ensemble cast, and the show’s backstage elements, it is a fine way to start your 2020.