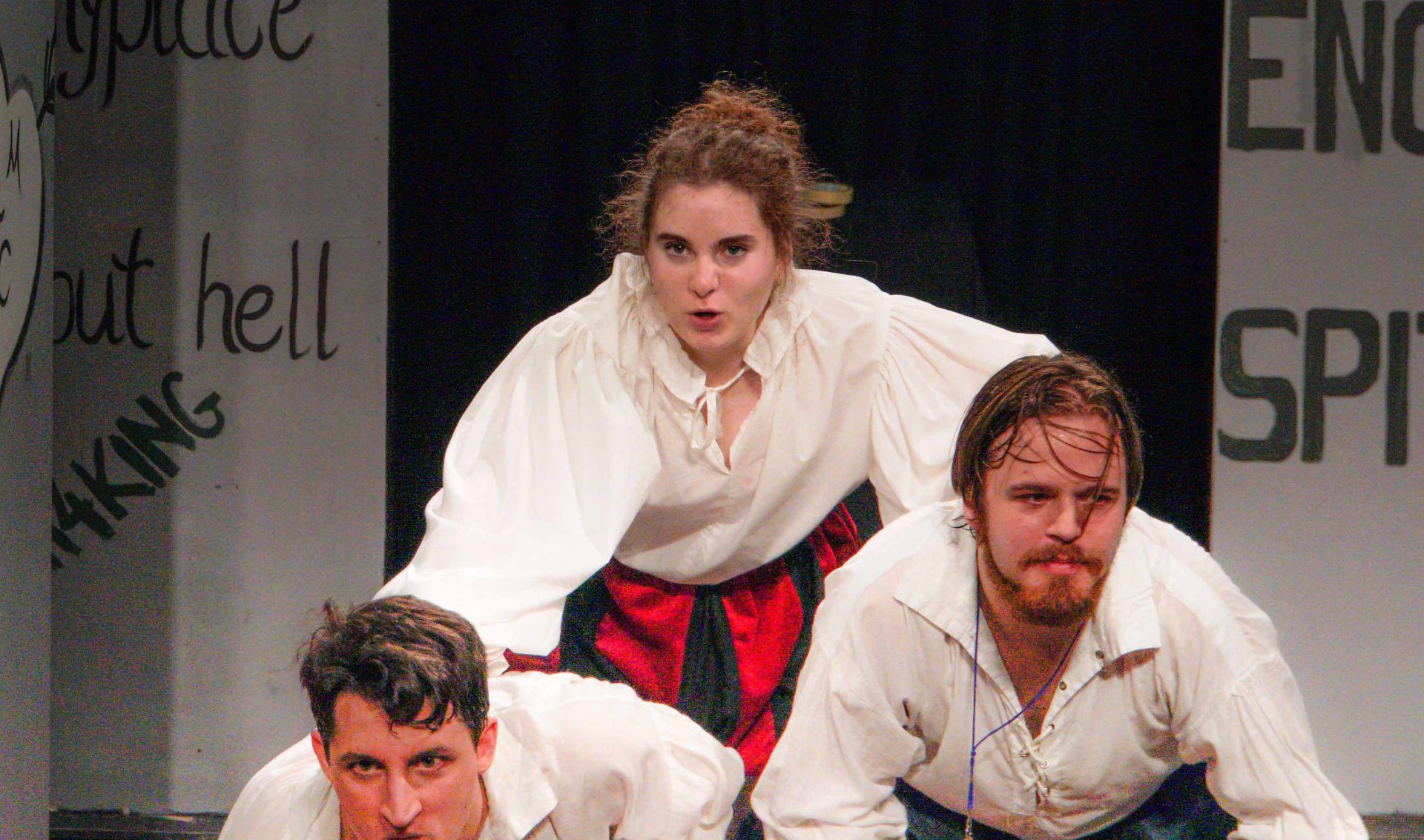 Bard to the bone.

Once upon a time, about twenty years ago, productions of The Complete Works of William Shakespeare (Abridged) seemed to pop up everywhere. It was unmissable before it disappeared. Courtesy of Lane Cove Theatre Company, it is back mercifully; and again not to be missed.

The merry conceit is simple: to stage the 37 plays of Shakespeare, roughly, in two hours for maximum theatrical effect. This effect is a night of continuous laughter, and the jokes roll into the audience at many levels.

The engagement is total and the audience assist in ‘layering’ the character of Ophelia with Id, Ego and Superego. There is no need to understand it, even if you are a postmodernist. It is an irresistible satire of acting techniques, Freudian interpretation, and audience participation.

The humour ranges from the coarse to the sublime via an intense undergraduate period. Coincidentally, this is the formula the Bard himself used to entertain both the aristocracy and the lowest of the low at the same time. There are asides, direct addresses, soliloquies, and an actor too sensitive to finish “to be or not.” And there is cross-dressing.

Cross-dressing to the point where we don’t care if the actor is male or female, which is rather the point.

The cast and director Jess Davis have brushed the script up to date; the internet is responsible for some detailed ignorance, with shows like The Block getting a well-earned knock and The Lion King even raising its head. The references are not gratuitous, and nor is my favourite line “Thanks Yoko, for breaking up the band.”

The show seems free-wheeling – to the point of chaos – but this is a carefully created and sustained illusion. Actors Logan McArthur, Eleanor Petricevic, and Luke W. Shepherd play actors called, coincidentally, Logan, Eleanor and Luke. Imagine casting Othello only with actors called Desdemona, Iago etc. A female cast member is a break from ‘tradition’ with this production and well worthwhile – more cross-dressing.

All three bring enormous energy to the evening. There are moments of exquisite timing, throwaway lines that must be ad-libs until you look at a script, and the rap summary of Othello is a piece of genius that needs complete clarity and synchronization.

So too Telmah (Hamlet backwards), performed in under 30 seconds, demands enormous control for us to hear gems like “Judas Priest is God”, and “Oob” from the Ghost. Ophelia drowning backwards is a must see.

This talented ensemble will continue to refine, though they are already dab hands at audience interaction. You will admire their skills and marvel at the speed of their minds. They have charm, the ability to create moving moments, and the talent perform some bits ‘properly’. Jess Davis is to be congratulated.

The audience loved it, particularly the many young people who, I guess, had suffered the ‘worthy’ approach in class. A Bard for the funnybone. Rubber chicken Shakespeare.

Just go. Before it disappears again.

P.S. A note for trivia buffs and nerds of all ages, Longueville is a Lord in Shakespeare’s Love’s Labour’s Lost. Coincidence?