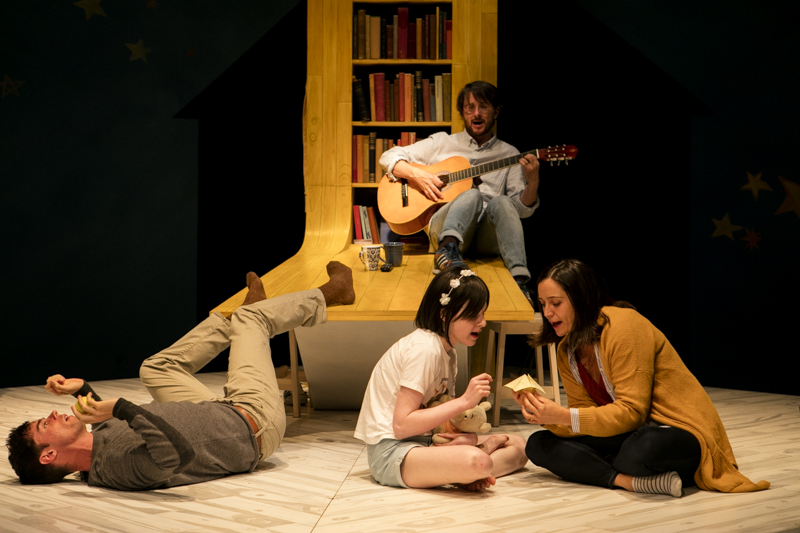 Belvoir St Theatre’s latest theatrical offering, the precocious lovechild of writer Peter Goldsworthy, director Darren Yap, and the National Theatre of Parramatta, is an astonishing examination of the human experience.

Unapologetically human, it is easy to get lost in the show’s many nuances, nullifying the minor technical niggles that arise over its 80-minute run time.

And by god can we not take our eyes off it.

Set against a striking backdrop of a child’s bedroom wall, coated in blue paint and decorated with clouds, stars, and a hidden door, Emma Vine’s simple but complex set design perfectly captures the play’s aura.

Each character is portrayed tenderly, with their own individual peccadillos cleverly unravelled throughout the performance. Whether it’s Nunan’s channeling of Ben’s anxiety early in the play, Jackson’s forceful mid-story abandonment of religion as Linda, or Truman’s moving performance of Wol’s fear of imminent death at its end, Rodgers and Yap expertly weave each character’s arcs together to deliver a most impactful cast performance.

That being said, Valerie Bader’s limited time on stage is the stand-out individual performance. Whether playing Grandma or Dr Eve, her ability to steal scenes with incredible comedic timing and great chemistry with on-stage husband Mark Lee lighten the weight of the intense emotional baggage within Sunbeam.

By contrast, Lee’s and Whittet’s performances fluctuate the most. With too little or too much to do, both actors find it hard to locate a middle ground; this is best seen with Whittet’s occasional breaking of the fourth wall, which requires too many fast-paced light and sound changes to let him perform fluidly for the audience.

Indeed, it is when the play starts to get technical that it dips.

Verity Hampson’s AV design – occasional clips of the cast at the beach or on the road that are projected onto Vine’s backdrop – can often be done without, with the only clip that held significant story value being played towards the performance’s end.

Additionally, the jarring light and sound design changes that accompany Whittet also follow other characters at times, slightly deviating from the realism of the performance.

Finally, audiences may take issue with the abrupt ending. Though left with a lack of closure for Ben’s soul-searching, Sunbeam is a play the audience wishes not to end. Thus, when it does, and a noticeable pause falls between the dropping of the lights and the start of applause, one will find themselves asking for more.

Which, when considered thoroughly, only speaks to the brilliance of the entire production.

Ultimately, the joy of Sunbeam is its ability to examine. With superb casting and compelling storytelling, the technical comments made in this review do not deviate from the emotions this show exudes. It is a masterful analysis of modern love by masters of modern theatre.