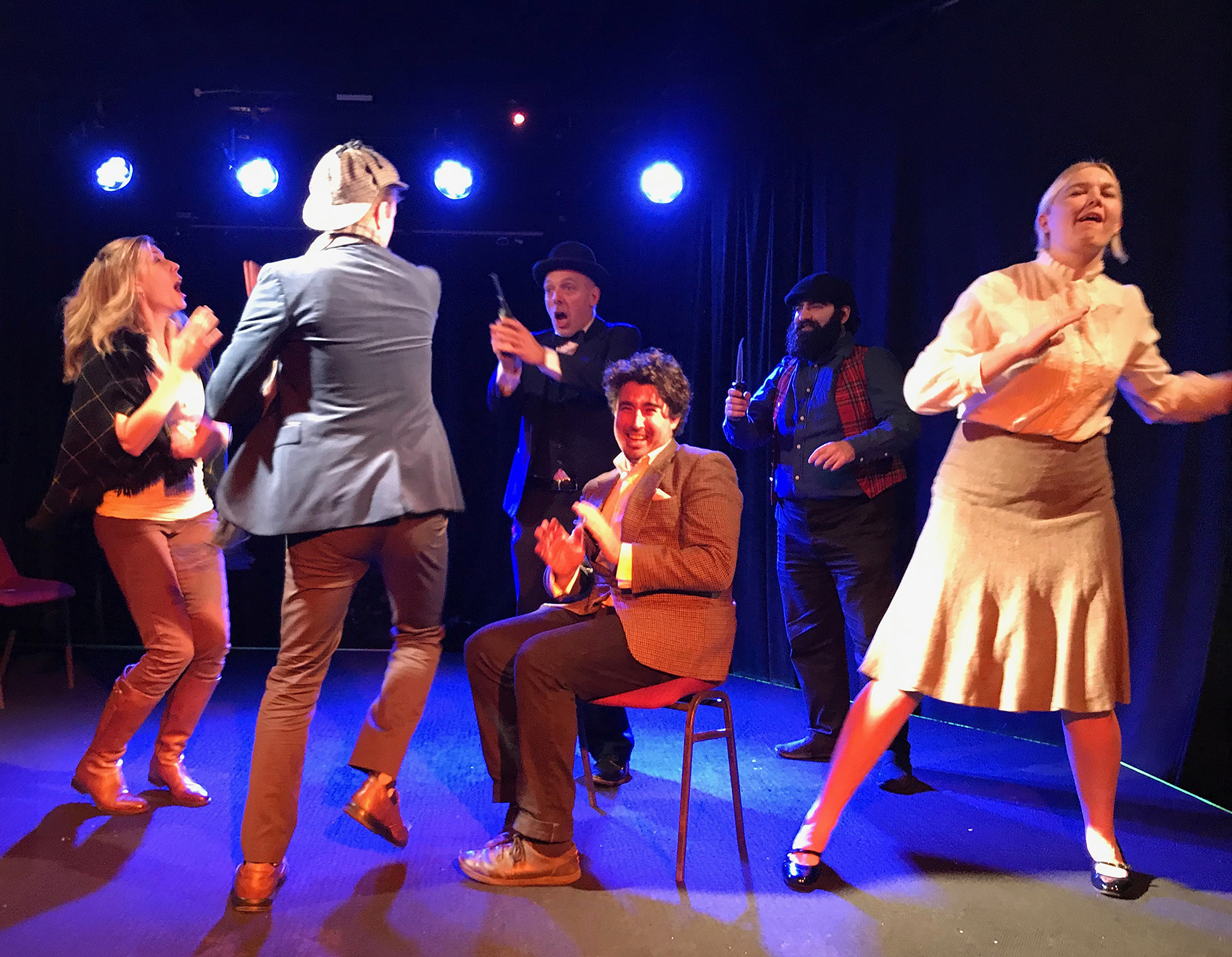 The Game is Afoot! (Review)

Stupid. Naïve. Moronic. All words I would normally use to give a scathing review of whatever performance I was unlucky enough to see but dutiful enough to tell you to do the opposite.

In the case of The Game is Afoot! An Improvised Sherlock Holmes Mystery, however, I use them with a whole heap of praise.

Much like the friend who is stale when sober but iconic when intoxicated, this hour-long show is best enjoyed with a relaxed state of mind, reduced expectations, and a can of Coopers (or 6). There isn’t much need to comment on the plot; there is extensive reference to the fact that what we see is not scripted and changes every night, dependent on what suggestions each respective audience members scribble down and put in to the top hat of Dr. John Watson (Jon Williams) as they enter the theatre.

Therefore, as is almost always the case with improv, the entire thing is going to be stupid; and this is no better seen through the characters themselves. Patrick Magee plays the infamous detective with an air of superiority and omniscience that is fairly traditional amongst other depictions of Holmes, allowing his performance to appear the most effortless. No doubt this effortlessness would be bolstered by his experience in the role over the past year. As far as accents go, his ‘Cockfosters cockney’ has to rank as one of the show’s dumbest, and therefore best, poorly performed voice. Credit to him for maintaining a consistent stage presence that kept things going along smoothly when they so easily could have gone off the rails.

Williams approaches Watson with an unusual level of submissiveness, playing more a bumbling sidekick than the usual self-centred persona audiences have come to appreciate. Whilst at times this paves the way for good cheap laughs – most often involving an unseen collection of gold star and happy face stickers as a form of reward or punishment – Williams’ best moments are when he picks up on the lapses of his cast. Edan Lacey (who plays a variety of supporting roles) is most often at fault for this, but Williams’ quick wit often saves the day. The confusion around the tort of battery (which is centuries old) versus the regular everyday battery (which an 1800s society would obviously know nothing about) drew some of the biggest laughs of the entire performance.

Lisa Ricketts (who, like Lacey, plays a number of minor roles) and Kate Coates (as Mrs Hudson and others), however, could rarely match the strength of the more established characters. Bar Coates’ unusually snarky Mrs Hudson, who has the one-liners and presence that has made the character so loved, the performance does simmer when they share the stage. Moments where ‘minding one’s beeswax’ is interpreted literally and just how olfactory the connection between siblings is get something of a laugh, but recognisably not as much as when they are with Magee, Williams, or Lacey. The two often shared what came across as a lack of preparedness, even for improv. It’s fair to say that Lacey experienced a similar reception, having his special moments but noticeably running out of ideas (which was funny mainly because Williams or Magee were able to pick up on and work with it).

It is hard, however, to not honour Will Erimya as the audience favourite. Donning minor roles akin to Ricketts, Coates and Lacey, his only directive to be moronic made for some great scene-stealing performances. The audience remembers him as Sausage Jones, for whom ‘Sausage is the name, Sausage is the game’ (innuendo potentially intended but not overdone), him as the Turk, to whom all white people look the same, and him as the boy who dreams of eating all the beeswax ever. In a performance (and comedy festival) full of jesters, he stands out as the ultimate comedian fool. There isn’t much to comment on musical accompaniment James Tarbotton, whose work largely goes unnoticed, but I’ll give him a gold star for the effort he puts in to orchestrating a show by scratch in real time.

Ultimately, for a ticket that costs less than $20, and as a show that prides itself on its pointlessness, it’s easy to see why it was a success at the last SCF and in Europe. There are some undulating moments, but more often than not we’re excited to see where the mystery takes us.