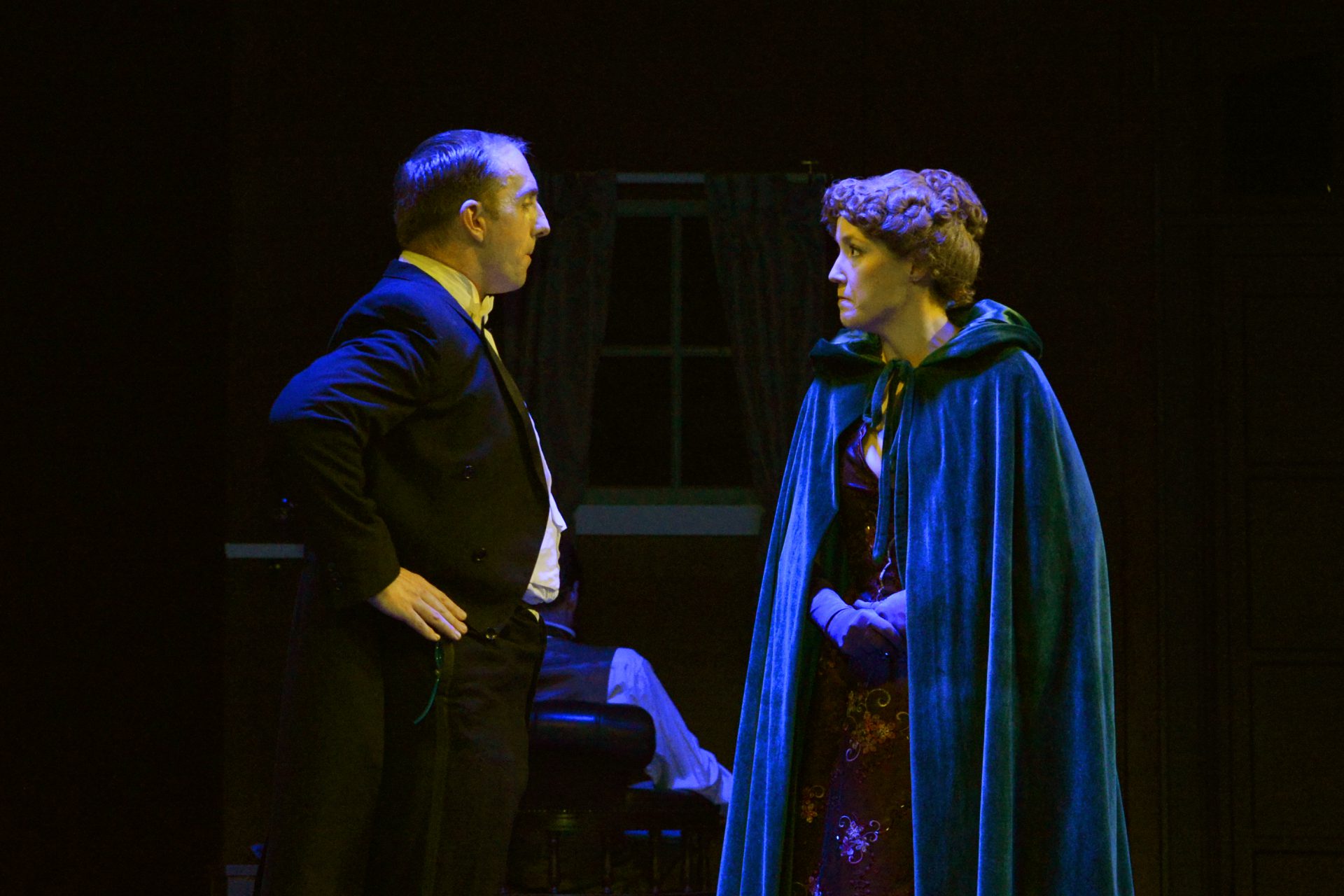 In true Holmesian style, Genesian’s pitting of Britain’s greatest fictional detective against one of the world’s most well-known criminals in a classic murder-mystery plays out exactly as one would expect: numerous unexpected twists and turns, a costume and set design well above its pay grade, and plenty of classic one-liners. However, the greatest plot twist of the evening is the ability for the second act of the show to alleviate almost all the faults of the first, leaving a once skeptical audience truly engaged in a great story told by a great ensemble.

Any Sherlock Holmes tale is driven by its characters, and whilst in this production it takes some time for many of the actors to show the best they have to offer, it is worth the wait. Directed by recent UNE grad Jess Davis and led by Genesian heavyweights John Willis-Richards (reprising the title role he played way back in the theatre’s 2014 production of Sherlock Holmes: The Final Adventure), Peter David Allison (as his right-hand man) and Zoë Crawford (as the psychic Kate Mead), the 12-member cast initially make the show’s 140-minute run time feel like 1400.

For the entire first act, no actor or actress is spared from jarring pacing or an inability to receive as much laughter from the audience as they (and Davis) should have anticipated. The murders themselves, featuring Celestes Loyzaga and Douglas Spafford in a range of roles, have a lack of energy mirrored by the static scenes featuring Sir Robert Anderson (James Charles), Sir William Gull (David Stewart-Hunter) and Lord Salisbury (Warren Paul Glover, who also plays Saunders), not fully engaging the audience in the mystery from the get-go. In the Holmes camp, Crawford easily demonstrates the strongest control over her character and how she wants to portray her, giving a most consistent performance of a character distinct even for a Sherlock Holmes story. Willis-Richards and Allison, on the other hand, struggle to find the balance between the arrogance-yet-genius of Holmes and side-kick-in-body-but-not-spirit persona of Watson respectively. They give either one of these at any given time but never both, with Willis-Richard’s particular lack of pacing indicating the sacrifice of communicating Holmes’ ingenious deductive powers for the less valuable depiction of his grandiose ego and Allison internally putting Watson in the sidekick position the books indicate he never actually believes he is in. If it weren’t for Sandra Bass’ scene-stealing performance as Mrs Hudson, giving her character the wit and presence that fans have loved for centuries, the lack of chemistry amongst the cast would make for a long first act indeed.

Thankfully, almost none of that is the case during the second act. The nobility, putting the requisite emotion and energy into their lines, managed to both introduce the audience to the extensive story behind the Ripper murders and explore it in an exciting way, finally giving the story the appeal it deserves. Spafford and Loyzaga are far more entertaining in their roles, with their fast-paced scenes and excellent use of the stage keeping the plot moving (although Loyzaga and fellow actress Heaven-Cheyenne Campbell could do with slightly less melodrama). Bass and Crawford continue their strong first act performances and again steal scenes from the two leading men thanks to their evident understanding of their characters. What is best, however, is the change Willis-Richards and Allison undergo. Allison, breaking the fourth wall and butting heads with Willis-Richards more often, both directly and indirectly communicates the fact that a Sherlock Holmes story is as much about Watson as it is about the great detective. He captures the humour of the situation he is in the way a proper Englishman would, finally getting the laughs he worked so hard for in the first act to no avail. Willis-Richards, unlike the first act, sacrifices ego for intellect and gives the audience the sleuthing Holmes they know and love. The deductiveness, logical thinking, and passion Holmes has for his work shines through, with no noticeable pacing or chemistry issues throughout his performance. A great ensemble performance in the second act, a credit to what Davis can do as a Director, and a fitting rendition of Brian Clemens’ original script.

Couple those strengths with a Bronte Barnicoat-designed Set and Peter Henson-designed Costume design the STC would be jealous of and visually, the show is just as strong as the people in it.

Ultimately, you will enter the performance’s intermission feeling underwhelmed by what you saw. It will certainly create doubts in your mind as to the rest of the evening, and rightfully so. However, regardless of the amount of hope you have in the show, by the time Sherlock Holmes and the Ripper Murders draws its curtains, you will understand why Holmes, and this theatre, is so loved.

The Game is Afoot! (Review)