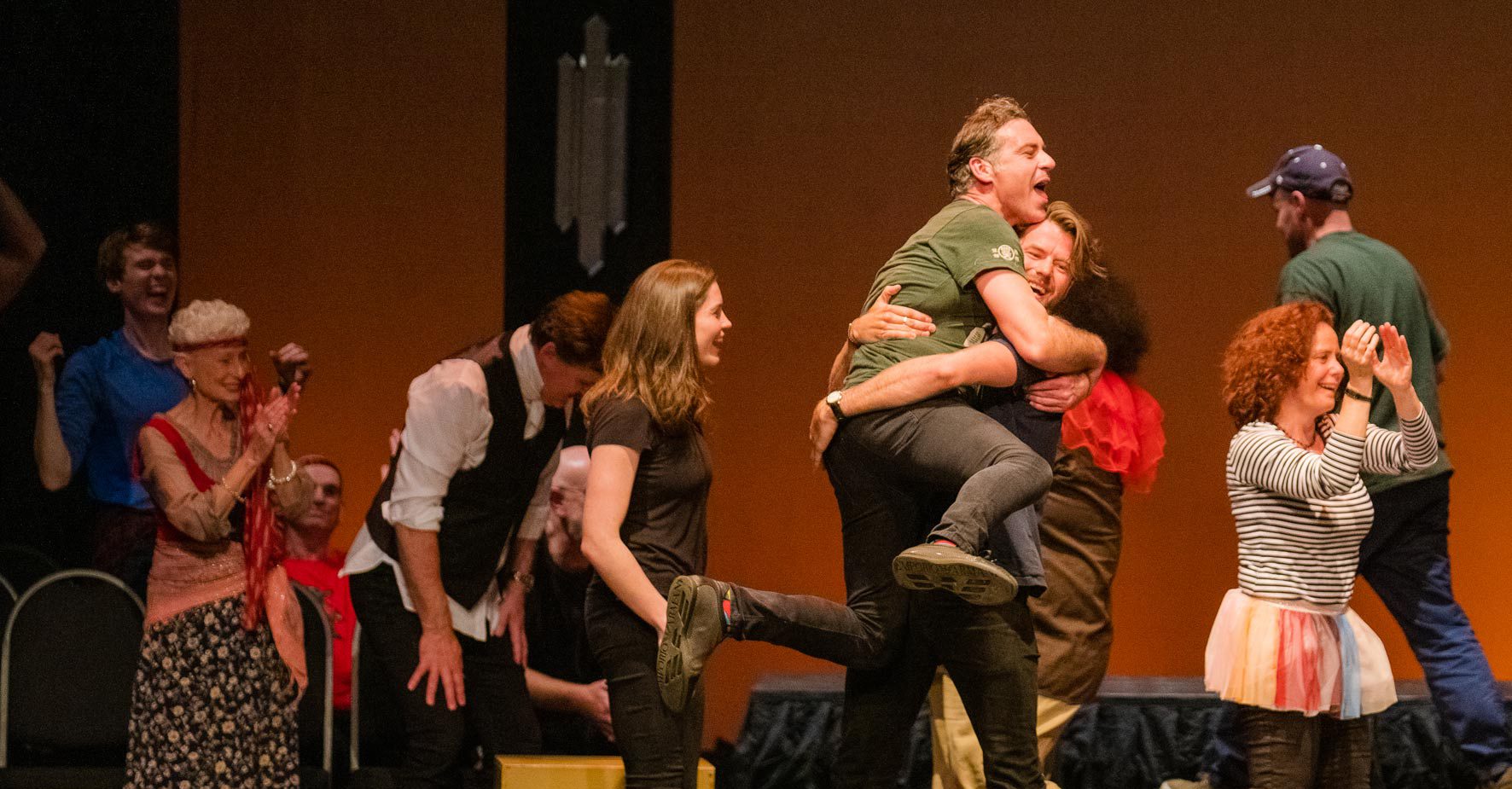 An evening of great laughs and all for a good cause. What’s not to love?

Full disclaimer: I love theatre games. I grew up glued to episodes of Whose Line Is It Anyway?; I got a certain thrill whenever Shane Bourne welcomed the audience to a new episode of Thank God You’re Here. I love it, in all its whacky, unscripted glory.

For those unaware, TheatreSports, run by Impro Australia, are based on improvisation games. Teams of four are given a challenge to create a scene, using nothing but a few props, teamwork and their imagination. Nothing is scripted.

“They’re performing without a net,” co-host Josie O’Reilly explains to the audience.

It’s fantastically corny, and the audience groans and laughs in equal measure.

Round One introduced us to the following six teams, all performing a bit of classic improv:

Round Two saw special guests offer inspiration for a scene via video; Andrew Denton’s (Interview, Enough Rope) recreation of his experience wetting himself in year 7 (yes, really) and Nicola Parry performing a nun on weed are some of the funniest things I’ve ever seen.

Particular performance highlights from the evening included a koala who smoked a giant joint in Canberra, a lion devour a spider-monkey at a school reunion, a Netflix special about a man and his donkey, a sex education episode of Playschool (with the darling Benita Collings, of course, and a very horny Big Ted), a climate change protest gone wrong, two step-siblings about to pash, and an epic opera about meeting at the wrong café. We even saw Andrew O’Keefe perform as an Indigenous documentary narrator, which – given the context of performing this in front of one of the producers for the recent Adam Goodes documentary – felt a bit on the nose, and was the only part of the evening I didn’t especially find humourous.

Nonetheless, you never know what you’ll get with improv, and that’s the whole point. Sometimes the scene works, sometimes it doesn’t, but you have fun trying. Or in the audiences’ case, have fun watching. It’s fast-paced, zany and a barrel of laughs. Even if you get it wrong, it’s all the more hilarious.

But improv is more than just having some fun. It requires listening to and respecting your teammates, trust, and teamwork. The teams that do the best are the ones that listen to each other and don’t all try to steal the punchline. Members thrive in the spotlight, and also as the ‘straight’ man.

Trapezey Does It clearly had that down pat as they took out the winning trophy with an elaborate scene about the most exciting of topics – an electric kettle.

Literally anything is an exciting topic in improv.

The real stars, however, were not the ones performing improv. 17-year-old Canteen Ambassador Joshua Bell was invited to the stage before interval to tell his story of battling cancer, and the immense help a charity like CanTeen offers young people in particular who are navigating a challenging part of their life. His heartfelt speech was equal parts touching and hilarious (perhaps a stand-up comic in the making?) and certainly had audience members reaching deep for a worthy cause.

Alongside him, it was Josie O’Reilly’s young son Ollie who really stole hearts though. Dressed as a circus ringleader, and tragically also with a cancer story to tell, the pint-sized performer gave us a rendition of The Greatest Show, and oh, my heart. I don’t think there was a dry eye in the audience.

The evening raised more than $6500 for CanTeen, and if laughter really is the best medicine, well, we were all in the right place.