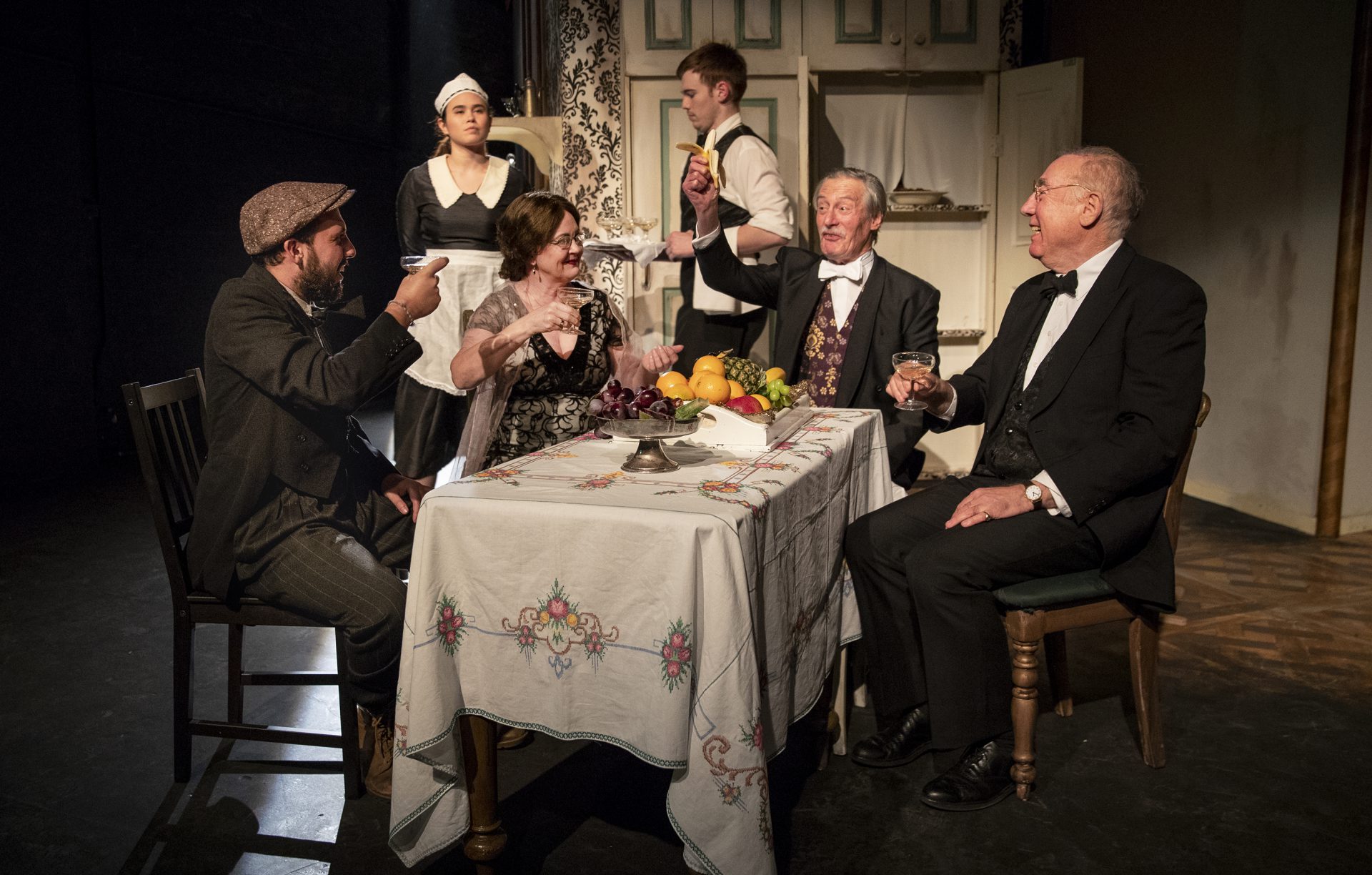 If Stalin was writing this review with me, I have no doubt he would already have pushed me away from the keyboard and taken over by now.  In his quiet and charming way, he would convince me to help him with matters of state while he “helped” me write a review.  ‘The play starts with a nightmare at manic cartoonish speed,’ he would write.‘The playwright, Mikhail Bulgakov, has a recurring bad dream about Stalin. He and his beloved wife, Yelena, live in a crowded apartment with others. His new play on Moliere premieres to great acclaim.  Enter Vladimir, a representative of the state. He convinces Mikhail to write a play about Stalin’s troubled early life, which clearly forges him into the Communist leader he is today.  At first Mikhail has trouble starting the play, but then a mysterious phone call leads him to a secluded room under the Kremlin. Stalin rescues the playwright! What a brilliant performance by the man who played Stalin.  What a glorious performance by Vladimir echoing the confidence and grace of Russia, and how sublime was the actor portraying the distressed Bulgakov, who becomes a changed man under Stalin’s masterful guidance. This play deserves the highest accolade.’

A man of the people, clearly.

Yes, this play is about Bulgakov and Stalin collaborating on a play about Stalin, a black comedy about the role of the playwright in a dictatorship. Begging the question ‘does the playwright become the mouthpiece of the ruling party, or does the playwright hold tight to his principles?’, John Hodge has written a thought-provoking piece highlighting the cruelty of Stalin’s regime and how ineffective one can be in such a culture.

Not a very positive view.

From a frenetic start, the play turns into a dark descent into the systematic oppression of the people, the squashing of an individual’s morals, and the extent of self-justification and excuse-making that only serves to further a totalitarian regime. Something we don’t need to squint too hard to see in our existing political structures.

Performance-wise, the cast was very strong. Whilst I felt the female roles needed more depth from the writer, the women were great at holding their own, all of them enjoying their time on stage. But, in its nature, this is a very male oriented play.  Andy Simpson was a very strong Bulgakov but seemed to lose energy as the performance went on. The more powerless he felt, the less energy he had, and the more we could sense this as an audience.  He does thankfully pick up in the second act, ending the play strongly, but I feel he would deliver a stronger performance with a more sustained energy drive.

Richard Cotter’s Stalin, by contrast, was a big bundle of cheeky energy – very far from what the program suggests. Consistently effective across both acts, his Stalin was, for me, a kind of demented King Julian from the Madagascar franchise; a character that drew the most laughs from the audience and deservedly so. David Woodland is outstanding as Vladimir, giving a very funny performance – dare I say bombastic – but delivered with admirable gusto nonetheless. He maintained this performance even in the second act, where his character goes a little under-utilised in the plot.  The rest of the cast, quite large when compared to New Theatre’s earlier 2019 shows, do a great job adding to the scenes, being given enough action and character so that they weren’t just mere scenery.

Director Moira Blumenthal has shown great vision with her production. The actors move effortlessly through the space and the fast start to the production does a great job to lift the energy of the room.  The first twenty minutes were expertly done – the changes of scenes bleeding into each other, breath-taking, confusing, enjoyable all at once. But such a fast start is hard to maintain. Near the interval Act the cast’s collective energy level noticeably drops and the scenes are only mildly transitioned compared to the rush of the first half.  Indeed, the last scene before the interval feels forced and incoherent.  The second act is slower, more serious.  The audience isn’t laughing as heartily, but at least still watching and being swayed by some of what happens on stage.  However, the blending of scenes seems to have been dropped completely. The cast do well to make a speedy transition, but the beginning and ends of scenes are quite distinct. How they miss the first half at this time.

On a bright note, Colleen Cook’s stage design manages to give us an authentic sense of a Russian apartment. The cupboard was used to great effect in particular – I won’t say how for fear of spoilers – but I thought it was quite clever. Cook’s costumes were also typical New Theatre standard, Sergei’s especially, and the gowns donned in the first half were gorgeous. Patrick Howard’s Sound Design was well chosen and felt very real in the set; Blumenthal has a lovely eye for detail in that respect.  She combines his sound and Martin Kinnane’s lighting design to great effect, but I feel she was too heavy-handed with the smoke machine in her ambition to achieve a dream-like feel, which became overtly noticeable sometimes. If you are somebody who is affected by fog machines, I would suggest a mask. In any case, the technical aspects of the show were very well controlled and put together.

Ultimately, I congratulate the New Theatre on putting on such a bold and difficult piece. Not perfect, but then again neither was the Soviet Union.