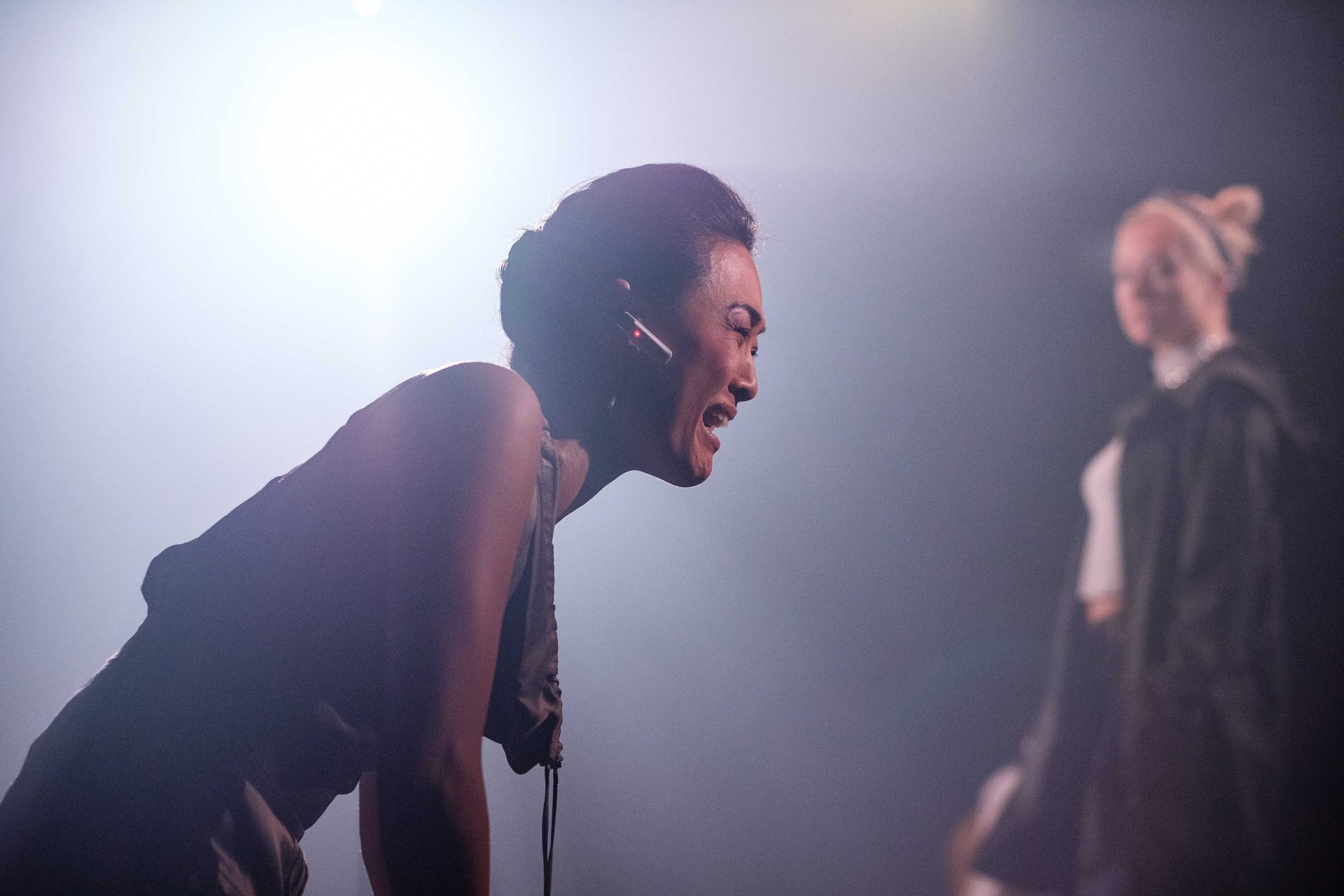 Pomona is, in more ways than one, like the longest rollercoaster one can imagine. The season opener for both bAKEHOUSE and Secret House, the 105-minute production is packed with dizzying highs, terrifying lows, and numerous unexpected twists and turns.

Yet, the longer one stays on this ride, the more all these elements seem to lose the impact they should easily have delivered.

The thing this production deserves utmost praise for is its casting. Right from the show’s tone-setting quasi-absurdist intro, featuring a sister-searching Ollie (Amanda McGregor), Manchester’s McNugget-munching building monopolist Zeppo (Dorje Swallow), and a mute, masked Rubiks cube addict (whom I will not name to avoid spoilers), those on stage tackle the Alistair McDowall-penned story’s quirks and oddities well.

Indeed, even as the plot deviates from its groundings in Ollie’s search for her lost sister and into the lives of Pomona-based security guards Charlie (Kevin Batliwala) and Moe (James Smithers), or the connection between businesswoman Gale (Monica Sayers) and brothel-runner Fay (Lauren Richardson), no performer lets up in putting forward a spellbinding performance.

This is particularly the case for McGregor and Batliwala; same but different ends of the emotional spectrum, McGregor’s naive desperation provides a fine contrast to the more knowledgable characters of her world and Batliwala’s inability to deal with the horrors of his past make for very strong individual performances.

However, what strikes me as the biggest issue in this play is its excessive script and subsequently underwhelming direction. Put bluntly, McDowall spends so much time setting up various storytelling and narrative devices that the eventual execution of those devices by director Anthony Skuse is lacklustre.

Most notably embodied by a stichomythic narration of Ollie’s experiences at two points during her search, a storytelling device dependent on a preceding scene where Batliwala plays Dungeons and Dragons with Keaton (Jane Angharad), and Smithers’ interesting but unnecessary character development, the play would have been significantly improved had Skuse cut or concentrated such devices into only their necessary elements.

What these elements do is dilute the production. Stuck between wanting to tell an interesting story but seemingly experimenting with how to achieve this in real time, the audience’s attention is divided, their focus too quickly re-oriented to another plot or character development to find a resolution to this dilemma.

The impact of what we are presented with, subsequently, is less so than what it should be. Though humorous, the emotional investment put in to moments or lines that deliver little substantive return ultimately diminish the expression of the play’s themes. For me, it is emotionally difficult to reconcile the gang-rape of a woman with no dignity with the comedy of a man who wants to cover the town of Manchester with semen.

Indeed, most audiences are still undecided as to how they should or want to feel about what they’ve seen even by the end of the performance. And though the argument can be made that this is McDowall’s intention, to leave one feeling indecisive, to me this is more an excuse than an explanation in this instance.

Ultimately, what this production should celebrate is the work of a fine cast. The operators of a rollercoaster too long for its own good, it is their steady control that keeps us on their side – even when there are limited reasons for that to be. How I hope to see more of that from KxT in the coming year.