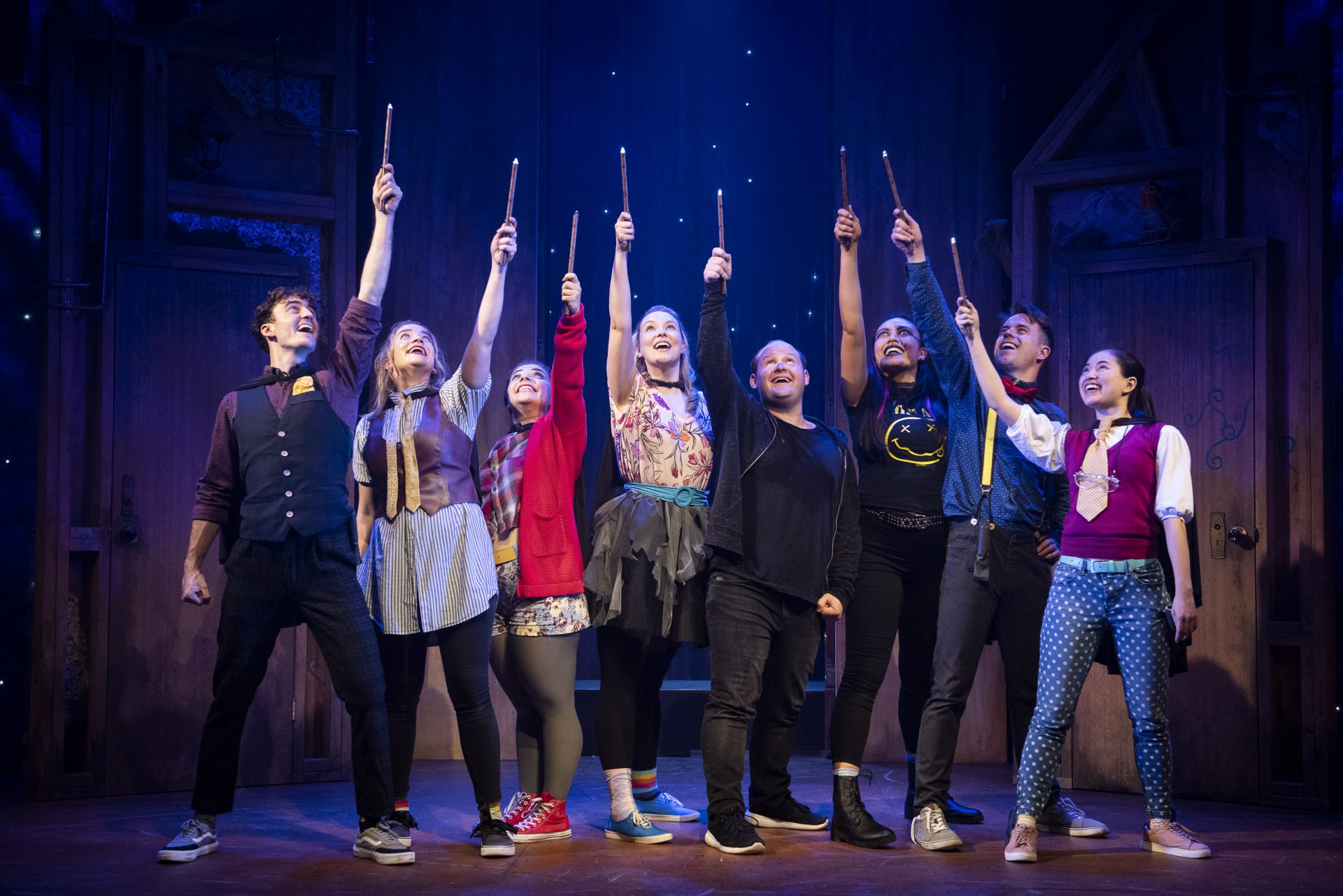 PUFFS, a hit both Off-Broadway and in Melbourne (which, thanks to Hamilton, is now Australia’s Off-Broadway), prides itself on its oddities. Rather than choose any of the multiple stages available in Sydney, Tilted Windmills Theatricals (one of the show’s producers) opted to build their own stage, Pop-Up Globe style, in Moore Park. The show’s fitting description, ‘For seven years a certain boy went to Wizard School. This, however, is not his story.‘, is firmly in everyone’s mind thanks to the extensive marketing campaign. Finally, in an ironic reversal this writer hasn’t seen before, the costumes the audience arrive in are more extensive than what the actual actors themselves wear (no offense to designer Madeleine Bundy).

From all those differences, the moves away from the norms that those who frequent the theatre are accustomed to, there arises a brilliant, original and engaging story that lives up to the hype it created and is a must for any and all Harry Potter fans.

At its roots, PUFFS is a show made for and featuring oddballs. This is evident directly from the opening scene, where the Narrator (Gareth Isaac) introduces the audience to the lead character. Forget the messy hair, glasses, and English charm of Harry Potter – instead, embrace the balding, timid, and portly nature of the Costanza-esque Queenslander Wayne Hopkins (Ryan Hawke). Alongside Hopkins is math genius but poor wizard Oliver Rivers (Adam Marks), the Ron Weasley replacement, and goth queen Megan (Angelina Thomson), something akin to Hermione if Emma Watson had an affinity for black clothing and teenage angst. Sorted into the Puff house, a copyright-free take on Hufflepuff house, the least special of all four original Hogwarts houses, the story largely revolves around Hopkins’ desire to stand out at the infamous wizard school during the same time as when Potter, Granger and Weasley were there, with occasional onstage cameos from the famous trio courtesy of actress Olivia Charalambous, a candlestick with a wig, and a red mop respectively.

Isaac, Hawke, Marks and Thomson lead a team of 13 that have a deep love for all things Potter and it shows. The all-Australian cast feed off each other with great comedic timing, constantly keeping the audience in fits of laughter to make its 2 hour run time feel like 20 minutes. However, the cast’s greatest strength is their unity; regardless of which duo, trio, or ensemble is on stage, the focus on farce is never dropped, ensuring a consistency that the audience’s laughter indicates is highly appreciated. This is all bolstered by Kristin McCarthy Parker’s direction, and therefore stands as the shining achievement for her in this process.

Further, in deriving its humour from both making fun of the original series whilst generating its own standalone comedy, individual actors are given an equal chance to shine. Hawke and Isaac, who maintain the same characters throughout the show, each deserve praise for their ability to generate a strong connection with the audience; Hawke’s character development is the most fluid of the ensemble. Whilst Marks and Thomson give fine performances (albeit drawing fewer laughs than they potentially should), one should look out for the unexpected ways PUFFS plays with Potter lore. Whether it be a sexual education class taught by Severus Snape (played by Matt Whitty, who also plays all Defence Against the Dark Arts teachers to roars of laughter), the overt glorification of Puff legend Cedric’s sexual and magic prowesses (played by James Bryers), or most notably the scene-stealing inclusion of a Cormac McLaggen-esque figure again played by Witty (who delivers the most expletives of any character in PUFFS), this writer is glad to say that this show not only meets the expectations placed upon it, but exceeds them.

However, for all its strengths, two shortcomings manifest in the audience’s mind. The first is the slight difference in comedic ability between actors. Annabelle Tudor (as Hannah/others) and Daniel Cosgrove (as J. Finch/others), suffer the most from this, having their moments of solid comedy but at points losing the audience on the night this writer attended; it is likely a younger demographic will take to their repetitious jokes more keenly. The second is less avoidable; in a play made for Harry Potter fans but from the perspective of an ensemble not directly in the thick of the book’s action, die-hard fans will notice the absence of a few key characters. Most notable of the omissions include Hagrid, a half-giant with a kind heart who is a prominent presence across the original book/film series, Dolores Umbridge, the fifth-grade Defence Against the Dark Arts teacher fans consider more evil than Voldemort, and Peeves, a poltergeist absent from the films but a favourite amongst fans of the books. In a play that features so much content it is easy to forget these characters in the moment, but one can only wonder how much this show would have been strengthened if these classic characters had been included.

Ultimately, PUFFS is well worthy of acclaim. If you’ve grown up with Harry Potter, been forced to engage with it by your kids, or have bothered to see at least one of the movies, there is much to enjoy. Be prepared for some absences and some lost jokes, but by the time you leave Entertainment Quarter, the efforts of the cast and creative team will have pushed those well into the back of your mind.

Saw the show in Melbourne twice and going three times in Sydney (in wizrd costume of course). Each performance has subtle differences and is worth seeing more than once.