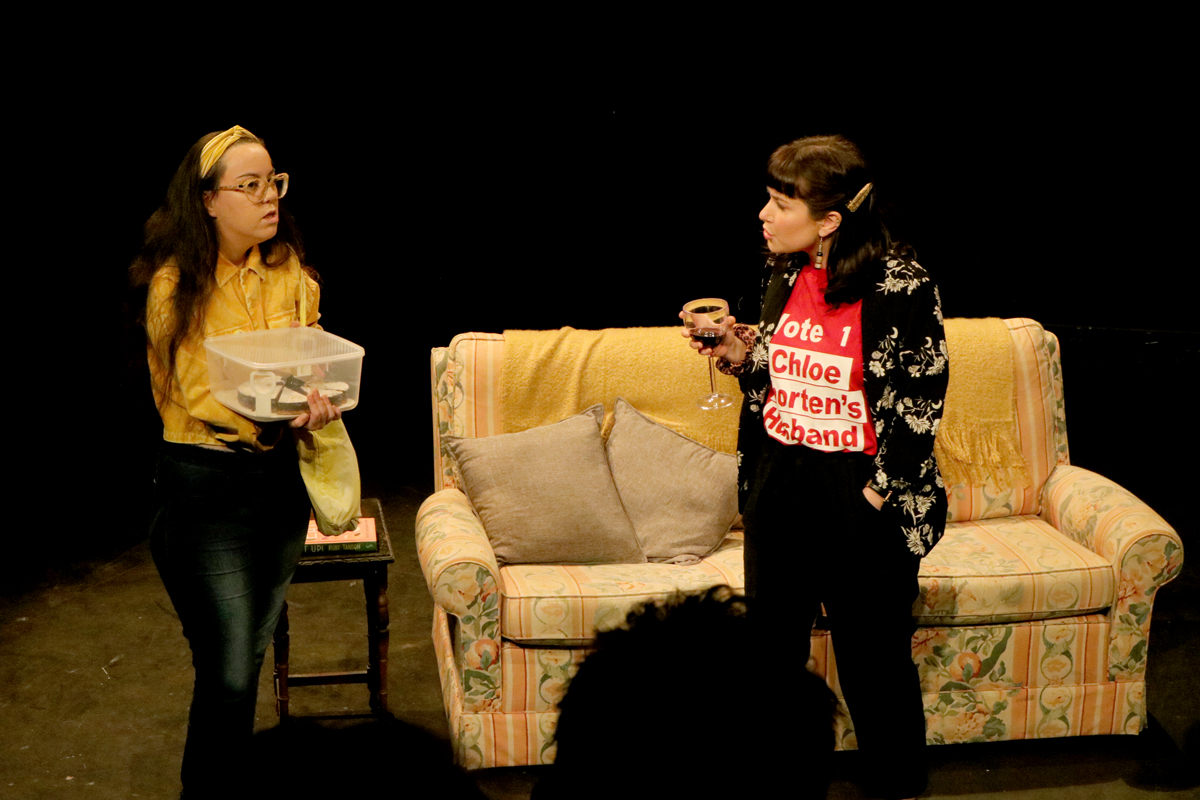 Newcastle-based youth arts group Tantrum, in collaboration with Melbourne-based theatre maker David Williams, brings their latest activist work, Sorry to Cut You Off, Penny to Erskinville. STCYOP markets itself as reminiscent of Don’s Party, albeit with less Lord Of The Flies-hysteria and more feminist critique. So it says, anyway.

Set during a rambunctious dinner party on the night of Australia’s 2019 federal election, one glance at STCYOP’s marketing will tell you that it’s clearly more catered towards audience members who lean Labor. But as the show continues it becomes apparent that the true tragedy is not Labor’s election loss, but rather the unrealized potential of what STCYOP could have been.

STCYOP is uniquely created and performed by the same four theatre creators as part of Tantrum’s Trajectory Ensemble program, whose characters appear to be personifications of each member’s personal political view. Phoebe (Phoebe Turnbull) is the host to yellow-loving but Clive-Palmer-scorning Meg (Meg O’Hara), politically clueless Daynah (Daynah Simmons), and Alana (Alana McGaughey), who is “tired of fuckwits” (aren’t we all?).

All except for Daynah hold strong left-wing views – this in itself is not an issue, as full-spectrum political discourse is not necessarily a crucial element for activist theatre to be significant.

However, what STCYOP fails to acknowledge is the diversity of opinion even within left-wing circles. As a result, we are left with three central characters who seem to agree on practically every issue except for preferred Twisties flavor. This lack of conflict leaves nothing to motivate the characters or drive the writing, which ranges from genuinely entertaining to cringe-inducing.

As such, STCYOP‘s core messages are delivered with about as much subtlety as an egg to the head, leading to a disappointingly bland first half that reaches its lowest point in a painfully dragged-out conversation between a seated McGaughey and Turnbull. Even worse, rarely does STCYOP let you draw your own conclusions: even the debate on Twisties flavors’ metaphorical moral is explained fully by Meg’s final line, where she declares that she “prefers to stick with what’s comfortable”.

Despite this, STCYOP does pick up in its second half thanks to the incorporation of more theatrical elements such as choreographed dances and backing track of Julia Gillard’s misogyny speech set to a four-part harmony (could someone ask Trajectory Ensemble to upload the mp3 file please?). It is also worth commending the set design by stage manager Alexandra Rose during this time, skilfully packing every prop alongside the cast to resemble a natural, homey flat.

Towards its end, STCYOP begins to touch on the complexity of political opinions even among similar people, contrasting Daynah’s apathy with the others’ disappointment, but never quite manages to explore it in enough depth.

Ultimately, STCYOP makes you work too hard for its genuinely good dramatic moments – it feels like the beginning of a conversation that never quite reaches the level of complexity it could achieve.