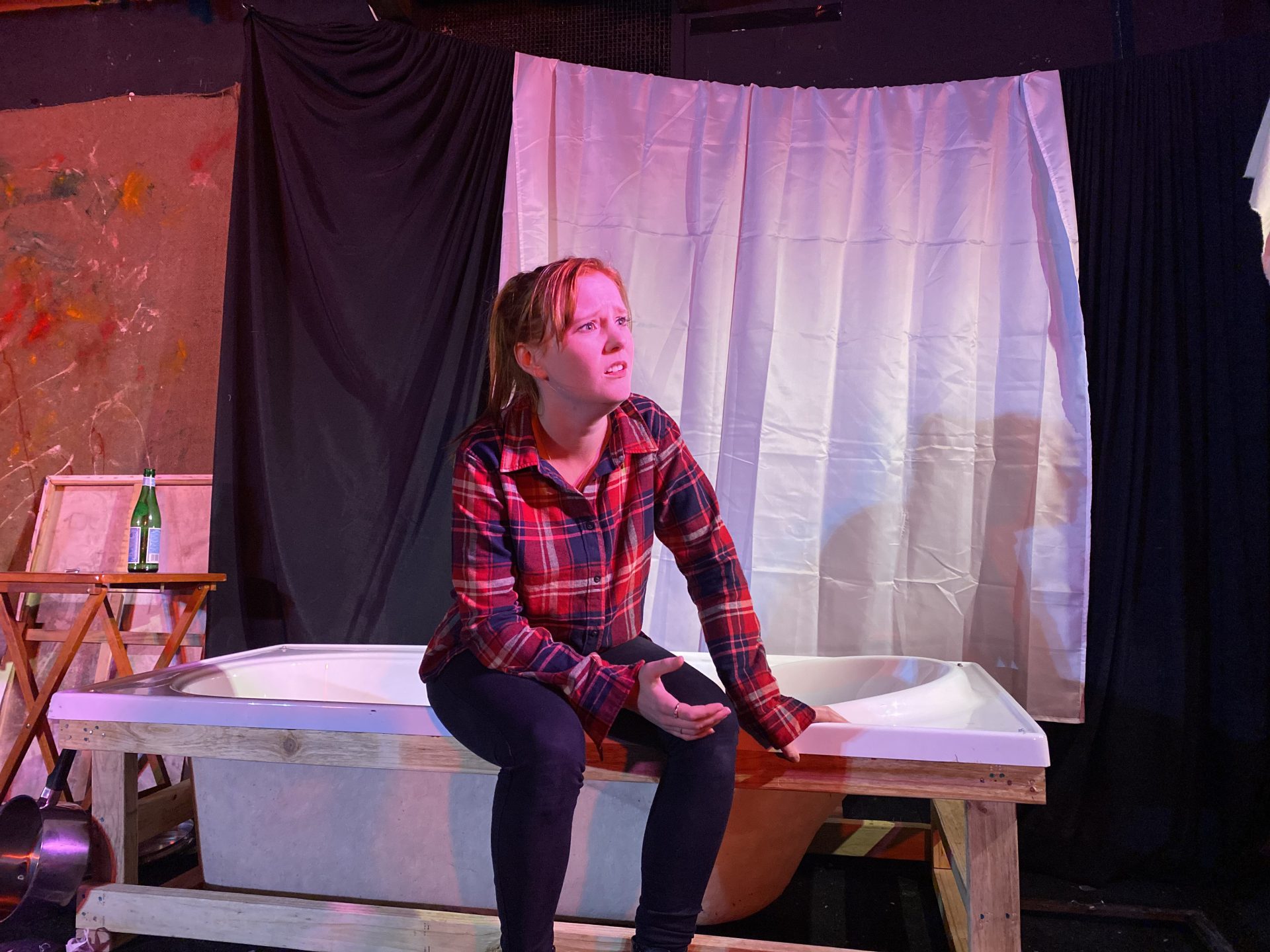 Watching The Credeaux Canvas, playing at the El Rocco Café and Theatre, one recalls just how nice it is to be back in a performance space once again. Though it’s dingy, reeks of pepperoni pizza, and is far from the place you’d typically expect Sydney’s first live theatre production after lockdown to be located in, it really is nice to be back in a theatre.

Even if the play going on inside it is not the knockout you’d hoped it would be.

The play primarily focuses on a money-making scheme devised by New York yuppie Jamie (Jasper Bruce). After being left out of his father’s will, he coerces roommate Winston (Samson Alston) to forge an artwork featuring his girlfriend Amelia (Rachel Marley). This artwork will be in the style of nude portrait artist Jean-Paul Credeaux, and be sold to his wealthy stepmother Tess (Beth Daly).

Yet, serious faults in pacing and character development plague this production. Marley’s opening duologue with Alston quickly loses energy. Their attempt to establish an on stage chemistry is hindered by the latter’s garbled American accent and the former’s obvious carrying of the scene. The injection of Bruce midway through this goes some lengths to resolve these chemistry issues, but needing to simultaneously drive the show’s plot, his character’s narcissism, and the script’s humour (with minimal dialogue) is a clearly challenging task for him.

Followed by a drawn-out nude scene featuring Marley and Alston, where both slow their pacing to something akin to a funeral march, and the show’s attempt to develop Winston and Amelia’s taboo relationship is lost on an audience exhausted from trying to retain focus and interest in everything they’re seeing.

Indeed, aside from Daly’s incredibly funny and immensely well-received post-interval cameo, the rest of the show is also mixed. Bruce improves because there are less simultaneous demands placed on him, but the poor manifestation of an affair between Marley and Alston’s characters means the emotional crux of the show lacks the impact it should have had.

These faults must, at least in part, be attributed to the direction. Though Les Solomon has managed to tell a story that has some interesting moments, the pace of the play as dictated by the script and his stylistic choices have seen the narrative’s nuances lost. In doing so, the audience’s ability to engage with the people and actions they see before them is limited, often leaving them longing for less rather than more.

Which is ironic, given how starved of theatre Sydney has been recently.

Ultimately, the best term I can use to describe this show is average. There are some good moments, some bad moments, and a few outliers either side of the spectrum. Is it everything one would hope for in post-lockdown live performance? No. But it’s all we’ve got for now, so what else are you going to see?