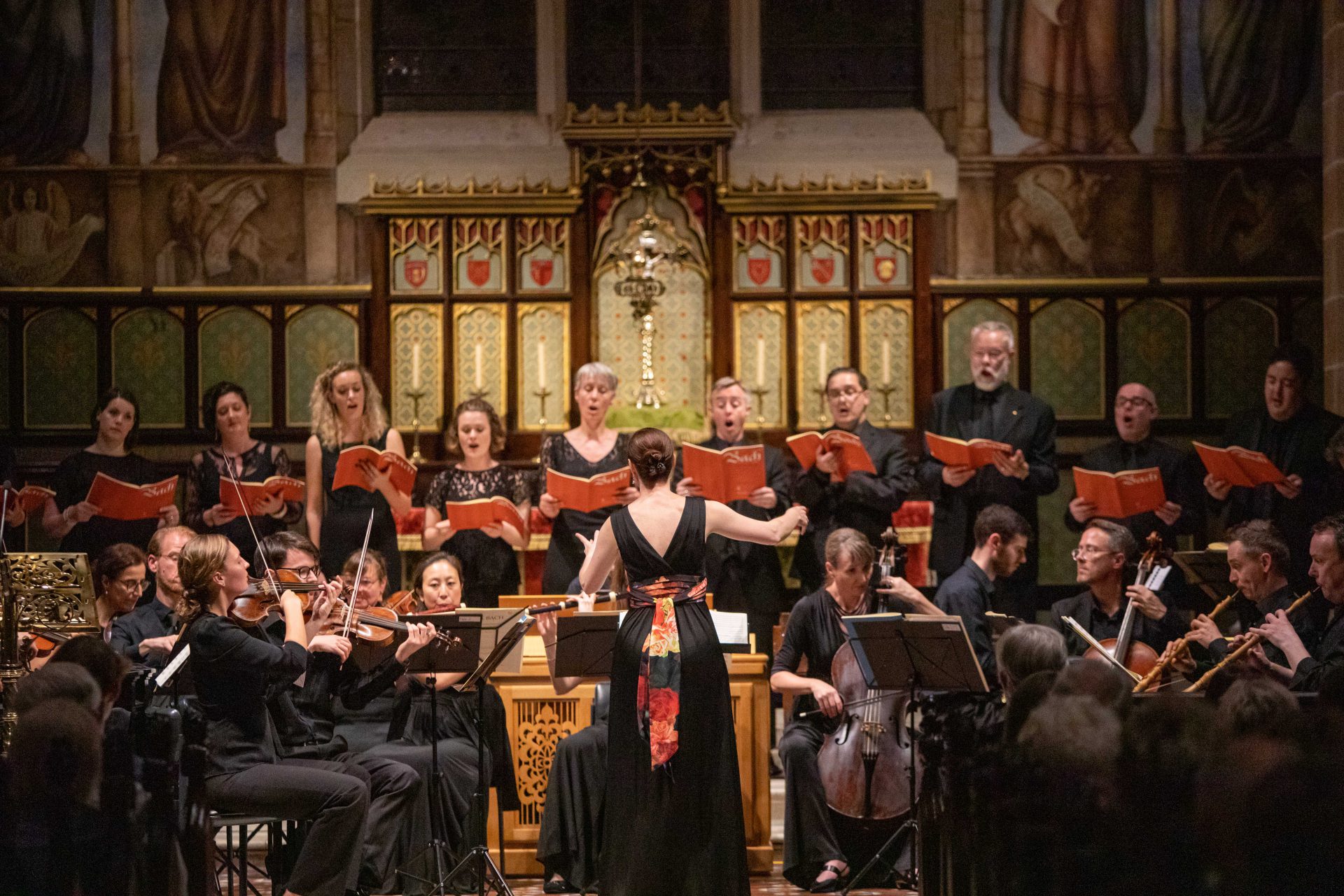 Four years since its founding, the Bach Akademie has firmly found its place as a shining ornament that adorns the mantle of Australia’s historically-informed performance scene.

The program for its first digital concert was as diverse as its title suggests – ‘the many faces of Bach’. Though we see Bach’s almost religious reverence for the stile antico throughout, we can also glimpse, for example, the secular glamour of his sonatas and the Italianate magnificence of the Trio Sonata form.

The concert began aptly with the Sinfonia to Bach’s Cantata No.182, Himmelskonig sei Wilkommen, which illustrates Jesus’ entry into a Jerusalem bedecked with palms. The performance at times seemed too fast-paced and slurred rather than processional and stately, but it was the absolute clarity of Director/violinist Madeleine Easton’s playing – one of the gems of Australia’s historically-informed performance scene – that shone through.

In the Trio Sonata, there was no lack of clarity in musical expression. This exposed the contrapuntal texture of a most remarkable piece, with light pastoral themes iterated throughout three, and sometimes four, voices. This formed a rich example of two very Bachian skills – the balance between technique and beauty, and the mastery of various musical forms (in this case, a form popularised by Corelli). The Vivace, and particularly the Presto, were played at brisk tempi which brought out the liveliness of each movement while the shimmering, but controlled, vibrato in the strings brought out the yearning that marks the third movement, with all its leaping intervals.

The final cadence of the third movement, which ends in something of a question mark, is answered by a vigorous rendition of the Presto. Harpsichordist Neal Peres da Costa’s virtuosic improvisations as basso continuo gave depth throughout, and the ensemble’s mastery of the cantabile style was nowhere more apparent than in the frequent interplay between flauto traverso and violin which had a distinctly sung-like quality.

The flute felt most at home in the Ricercar a 6 from The Musical Offering, which followed. But this was not only because of flutist Mikaela Oberg’s consistent virtuosity. The Ricercar was based on a devilishly complex chromatic theme given to Bach toward the end of his life by Frederick the Great, a flautist. We can immediately tell that it was a riposte not only to this challenge, but to Sanssouci’s affections for an incurable plague that was then spreading toward Leipzig and which we can now say, to Bach’s displeasure, did not fade like Prussian blue – the empfindsamer stil.

The ensemble realised this was a stark contrast to the gaiety of an Italianate sonata and played with a solemn appreciation for the rich texture of this fugue, which includes inversions of the theme as well as many countersubjects, and looks back to the works of Sweelinck and, even further, to Palestrina.

In the obbligato sonata could be seen each player’s mastery of articulation, which was all the more important in the first movement with its many voices, some falling quickly and in perpetual motion like the theme of a toccata, and others rising slowly. The second movement had a similar question-answer structure to Bach’s viol da gamba sonatas and Easton and cellist/gambist Daniel Yeadon played with great affect, which was appropriate for such a plaintive piece marked by so many sighing appogiaturas. In the third movement, Peres da Costa emerged from the basso continuo and excelled as a soloist in what was a remarkably self-contained cadenza-like movement.

The performance of contrapuncti 1-4 of the Art of Fugue was a moment of great pathos. Each piece looked forward to the unfinished contrapunctus. The ensemble realised that the dotted rhythms of the second contrapunctus in stilo francese needn’t be made too light-heartedthough the great intensity in the stretto passages of the third contrapunctus were lightened by expressive mordents synchronised throughout the ensemble. This was a touching tribute to a great composer the 270th anniversary of whose death the world commemorated only days ago.

This performance showed that the genius of the Bach Akademie is that it allows us to see so clearly the genius of Bach, and in a way that excites the mind of the student as much as it does the ear of the listener.