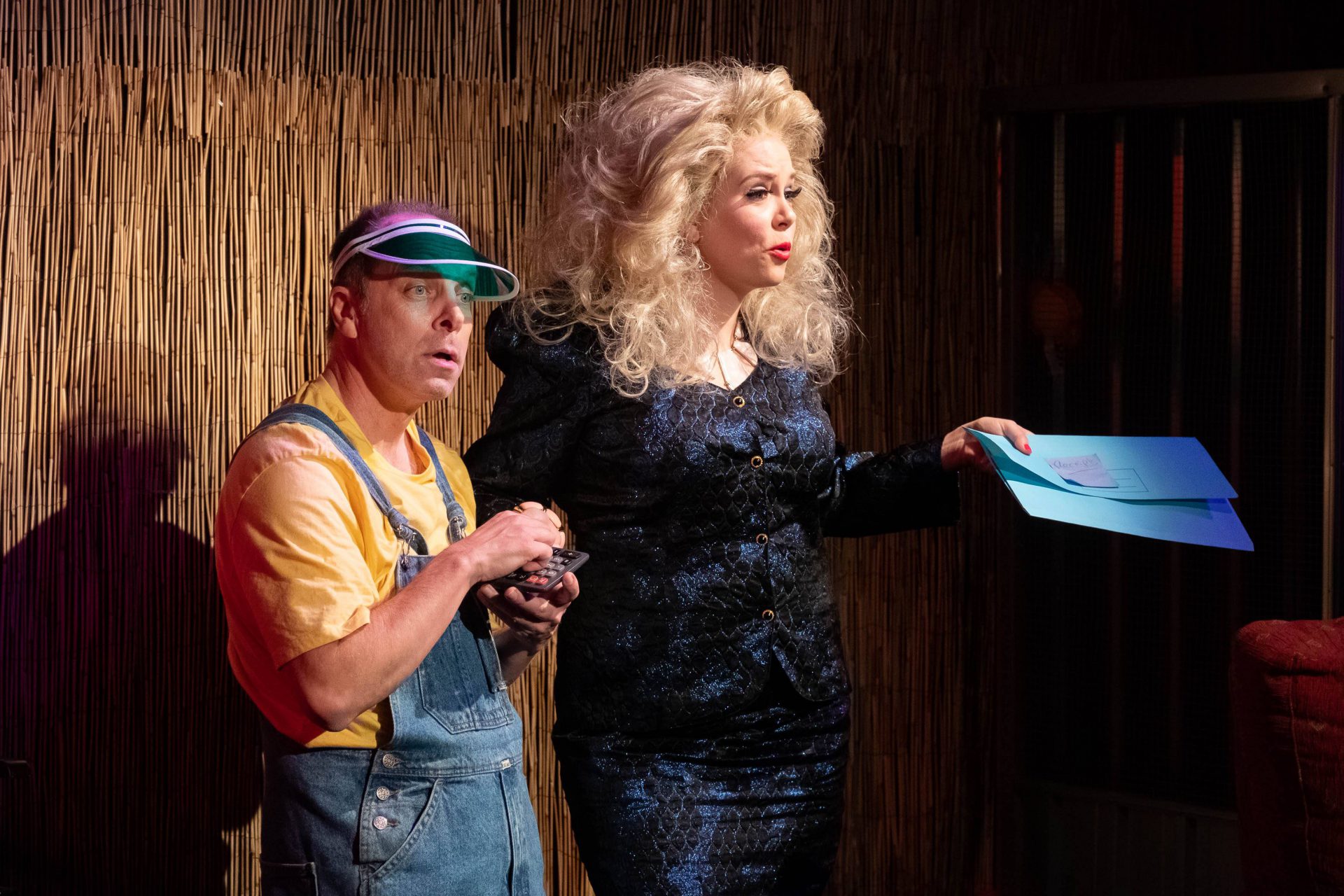 Trevor is the story of a washed-up actor trying desperately to catapult himself back into the realms of relevancy with another shot at fame, hoping the famous friends of his past can help him land an audition that fills the creative void that’s missing in his life.

Considering the play on those ideas alone, it’s an uninteresting story. Except, in Outhouse Theatre Company’s production of Nick Jones’ script, Trevor is a chimpanzee. And this piece was inspired by true events.

Yet, by five minutes into this clever, bizarre, Shaun Rennie-directed creation, all those oddities somehow coalesce into something truly terrific.

In a performance-driven play, Jamie Oxenbould toes the line beautifully between buffoon and believability. Loafing about the small KxT set as Trevor, there’s no chimp costume on his body or mask on his face; instead, he’s dressed in blue overalls and speaks in English. Rather, it’s the way he walks, talks and picks nits out of his ears that really tells his story. He breaks the fourth wall without taking the audience out of the scene or being an over-the-top caricature of someone ‘acting like a monkey’ to give a strong lead performance.

His keeper, Sandra (Di Adams), highlights the delusions we sometimes face when we love someone unconditionally – prepared to excuse bad behaviour, deluding ourselves into thinking that everything is alright, the list goes on. Channeling a little bit of Jane Goodall, Adams plays this role with heartbreaking pathos that supports Oxenbould well.

Ainslie McGlyn, in the supporting role of Ashley, does a great job at portraying the frustrations and terrified neighbour-with-a-baby character she has, foreshadowing important and memorable scenes later to come with an eerie omniscience. Further, whilst Jemwel Danao’s animal keeper doesn’t seem to know that much about the behaviours of chimps (but then I suppose, what urban animal keeper does?), his transition from gentle to hysterical doesn’t miss a beat. Garth Holcombe, playing fellow famous chimp Oliver who appears to Trevor in visions, seemed to be straight out of an episode of The Mighty Boosh; that comment is made in the best possible way. His pompous chimp dressed in a glittering white suit was a great vessel to highlight the inner thought process of Trevor. David Lynch, who plays flappable cop Jim, delivered his character with the perfect despair of someone trying to play the role of both friend, and officer of the law, with a few great zingers thrown in for good measure.

A special mention, however, goes to Eloise Snape, who plays deliciously 80s sitcom star Morgan Fairchild. Zany and hilarious, she had the audience in stitches every time she entered the set, especially when she crawled out of the oven – that’s my kind of absurd!

Another special mention, and one for the crew rather than cast, goes to dialect coach Amanda Stephens Lee. There’s nothing worse than an accent off-infliction to hurtle you back into reality, but I was mesmerised the entire time by what I was hearing on stage; no doubt the result of her immense talents that don’t deserve to go unrecognised.

What I especially loved about this piece though was its attention to detail, and the little things that are easy to miss but clearly important to the Outhouse team (and Set/Costume Designer Jonathan Hindmarsh). Whether it be Sandra’s fridge, filled with bits and bobs that you’d find in your own, the kitchen set littered with ‘autographs’ of Trevor stuck to the walls like kindergarten art, or a pot pie which Adams loosely removes the lid of the tupperware container for before popping it in the on stage microwave, it’s the tiny details that make the show, people!

Yet, my main let down with this show was the ending. Without spilling spoilers, there was a climactic, exciting moment that I think really ended the show on a high. In many ways, it felt like the perfect moment to finish. Except… it didn’t. The ensuing scene felt like a haphazardly-wrapped present, unnecessarily explaining (read: spoon-feeding) what had just unfolded in the last 90 minutes. The only upside was that it gave David Lynch a few extra zingers, which for its palpable comedic value could have been sacrificed for the sake of the story as a whole. I also pray for the day that tiny spaces don’t use smoke and haze for dream sequences; I get it’s dramatic, and maybe I’m just old, but all my laughs in the otherwise very funny scenes involving Holcombe and Oxenbould colluding together turned into splattering coughs as smoke lined my windpipes. In a 100-seater space, you need to think about what’s being pumped into the air.

Ultimately, despite feeling like one spent the entire evening on the durries, Trevor is quite the romp. A cleverly acted story about human truths, as told to us by an ape. How’s that for irony?