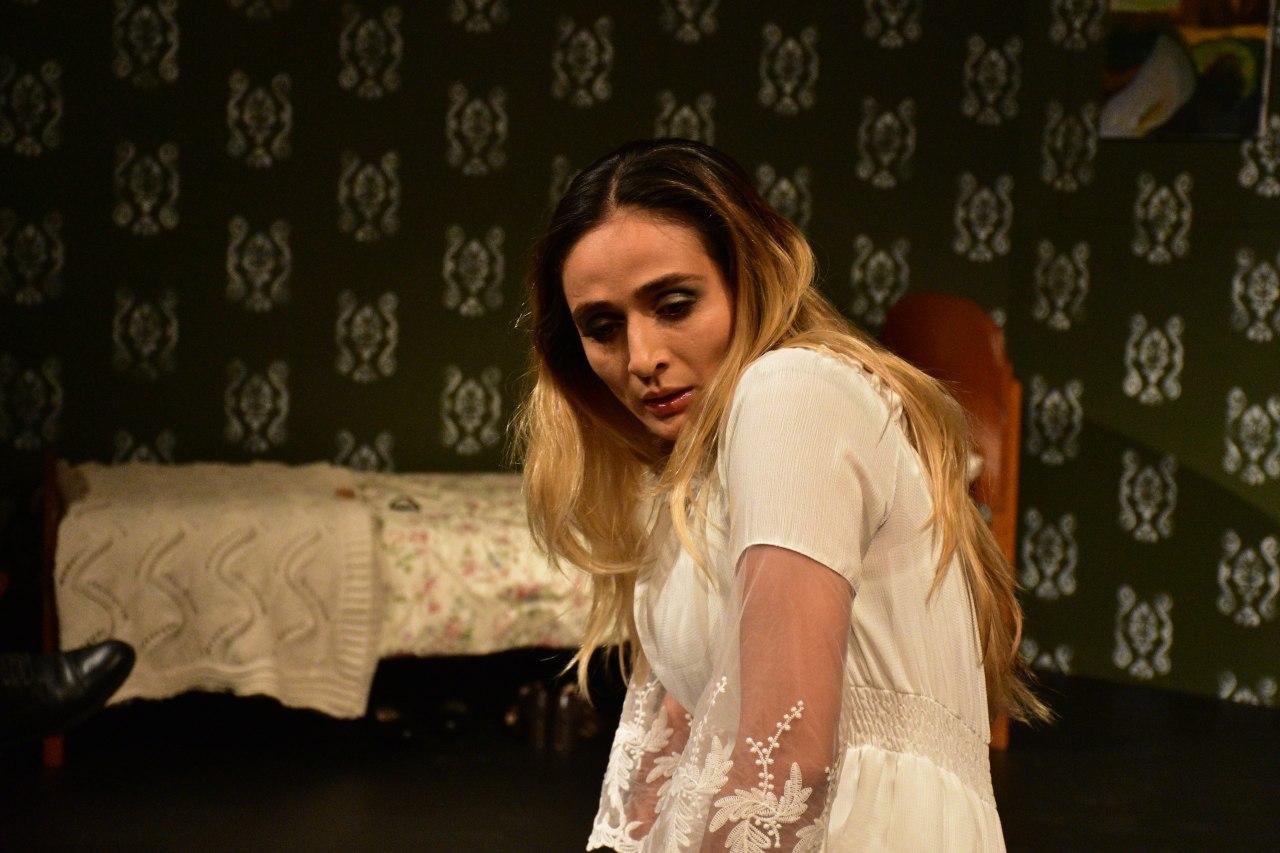 Better known as the chilling author of Rosemary’s Baby, Ira Levin’s script explores the journey of a young woman, with Susan (Parisa Mansouri) asked to follow through on a bizarre favour asked of her by an (apparently) elderly couple when out on a date with a man she barely knows (Hamed Masteri).

Holding true to Levin’s non-linear structure, the substance of the Ehsan Aliverdi-directed play isn’t altered too greatly – with the exception of elaborate staging which comes to define the performance.

A realistic, 1930s-bedroom set is coupled with projected paintings that come to be effectively used for reflective moments throughout the piece, with an unidentified female character intermittently whispering intriguing ideas about the nature of self.

As all dialogue is delivered in Farsi, with subtitles subtly projected above the stage. Yet, the physicality of all performers becomes the primary form of character development – both for good and bad.

As Susan finds herself trapped in a bedroom by the couple, who now appear middle-aged and aggressive, she is played consistently panicky. While capturing the true horror of Susan’s experiences at the performance’s beginning, Mansouri’s panicky questioning of identity as Susan or Veronica grows repetitive, and the subtlety of an identity crisis is here left partly unexplored.

This, however, is swiftly overlooked by the captivating physical performance of Arash Salehi as Veronica’s father, who perfectly characterises an authoritative, controlling father-figure and complex devotee to his wife – as well as his elderly façade.

The show often blurs line between realism and absurdism, with red lighting and cyclical asides breaking the fourth wall to a spooky yet sometimes confusing effect. These asides are subtitled merely as a “whisper,” losing the symbolic, eerie value that they are created for simply due to poor audio and inadequate subtitling.

Despite this, smooth transitions and a well-crafted set keep your eyes glued to the stage, compelled to discover whether the protagonist is in fact Veronica or Susan – and whether such a question even matters!

An increasingly loud, unnerving and electronic soundtrack begins to foreshadow a dark revelation kept for the play’s conclusion – to suspenseful effect. As we come to discover the disturbing reality behind Susan’s entrapment, the true identity of each character comes to light and provides a sense of partial resolution.

These discoveries would not be as effective without the fascinating chemistry between Salehi and Shiva Mokri, who use Flight Path’s small stage to their advantage. Mokri complements the fantastic characterisation of Salehi, whose painful catharsis is brilliantly expressed, despite some exaggerated physicality that does not fit with her character’s persona.

Humour peppers the fabulous tension between Susan and her former date, now posing as her psychiatrist, Doctor Simpson. A more subtle exploration of the fragile self would have been valuable here, which could have taken place through more humorous, nihilistic delivery of some lines on the part of Susan.

Regardless, several silent moments from Mansouri (as Susan) provide an insight into the harrowing nature of an existential crisis, and how changeable our identities can truly be.

With convincing performances keeping you engaged for the entire duration of the play and subtitles not proving an obstacle this production is an intriguing interpretation to say the least. While the subtlety of identity loss and personal safety could have been better explored perhaps by slowing down moments of dialogue, this is partly outweighed by the well-crafted and complex performances of its actors.

The question ultimately left from the production lies not in whether Susan is Veronica, but in whether her possible changeability between the two is something we could see happening to ourselves.

Our Blood Runs in the Street (Review)

Sherlock Holmes and the Death on Thor Bridge (Review)