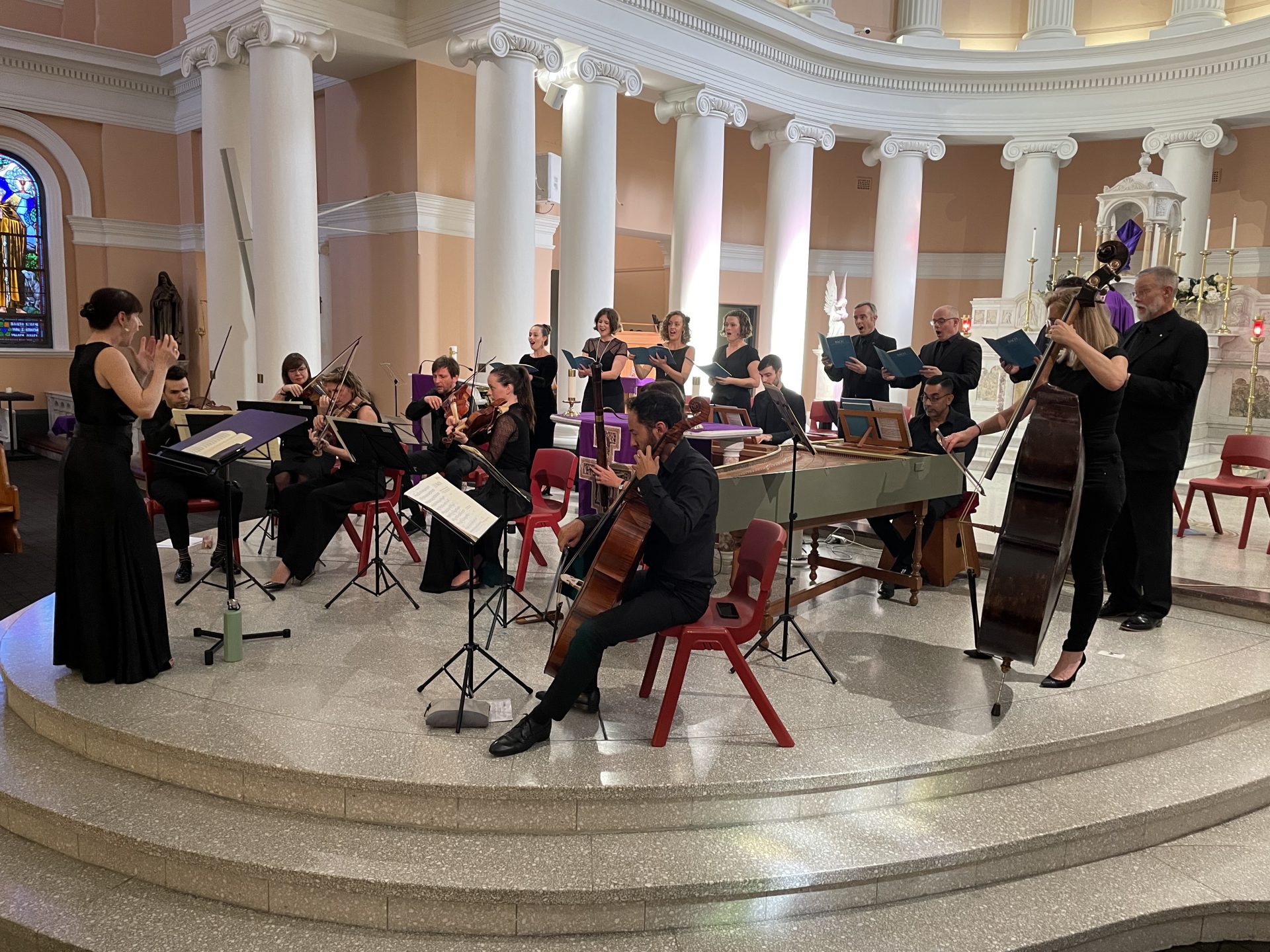 Alleluja is a fitting title for a program of Bach’s works centred on praise, reflection and celebration. These three themes mark the Easter season as much as the Bach Akademie’s Easter concerts do every year in Sydney.

The concert began with Christ lag in todesbanden (Christ lay in death’s bonds), composed for Easter when Bach was in his early twenties. It is typical of Bach’s early cantatas, marked as they are in true Saxon motteten tradition by a profound respect for counterpoint but also a Schutzian focus on intensity of affect and word-painting. This is made nowhere more apparent than in the rich and lyrical opening sinfonia, played here with stark contrasts of loud and soft in the repeated phrases and at an eerily slow speed, as though to anticipate the touching depiction of Christ’s suffering that is to follow. The sinfonia also serves to introduce the Lutheran hymn on which each and every movement of the cantata isbased.

That hymn is given its most technical development in the next movement. Imitating a fractal, the hymn is sung augmented by the sopranos with the lower voices imitating it in diminution. As the sopranos are so often given the hymn as cantus firmus (the very pillars on which the cantata rests), they needed to be more forceful at times so as to stand out among the other voices (which in this setting were two-a-part). There is nothing more satisfying in a Bach cantata than hearing the hymn burst out as cantus firmus among the intricacy of everything else.

Bach gives hints of the cruciform with angular four-pointed phrases played well by the strings throughout. Hier ist das rechte Osterlamm was by far the highlight; and Andrew O’Connor’s clear and commanding voice was perfectly suited to it. The same could be said of the Es war ein wunderlicher Krieg conducted at a spectacularly fast pace by Madeleine Easton which brought out the marching war-like theme suggested by the words and their musical setting in rigid stile antico.

Singet dem Herrn was next. Scored for double choir, this is one of Bach’s most contrapuntally dense and busy motets, and at times there were slips in coordination and timing which led to a confusion of voices. But the voices were very good at punctuating the falling ‘sin-get’ motif and they picked up resolutely toward the end and faultlessly executed the many wavering melismas in the Lobet.

Easton proved her point when she said the reconstructed Triple Violin Concerto was an ‘instrumental alleluja’. What followed was one of the most joyous renditions of a piece that deserves to be more known in this form. The tempo chosen for the first movement was suitably fresh and the rather languid adagio was very moving. But the third movement was by far the highlight. It was a great opportunity for each of the three principal violinists to shine as soloist, first with Stephen Freeman on rapid arpeggios, Easton with cascading passages and then Matthew Greco mastering a whole variety of tortuous passages with breath-taking skill.

The Missa Brevis in A was the only piece that followed the intermission. It is a curious piece, not only because it was composed by a devout Lutheran, but also because we do not know exactly when it was performed; and the musical scansion is rather odd (perhaps indicative of recycled musical material). The opening Kyrie was joyous and pastoral, with the dotted rhythm echoed by flutes, and the sudden entry of the voices was wonderfully clear and certainly not confused as most recordings would have it. To me, the Kyrie is an exemplar of Bach’s mastery of modulation, traversing several keys in the space of a few bars but always in a way that is so seamless.

Hannah Fraser’s voice in the Et in terra pax was wonderfully comforting. The Qui tollis is one of the most heart-rending movements in the entire mass (as it is in the B Minor Mass). Keen Bach enthusiasts would recognise it as an adaptation of Bach’s aria Liebster Gott erbarme dich which was scored for oboe da caccia, an instrument of which Bach grew very fond in Leipzig. Here it is scored for two flutes. Mikaela Oberg and Jessica Lee did a wonderful job of deliberately accentuating the dissonances on the first beats to heighten tension. This was softened by Chloe Lankshear’s voice which was crystal-clear, mesmerising and in all respects truly unparalleled. It was fitting that as the ensemble came together for the jubilant Cum sancto spiritu a ray of light beamed into the church on what was a beautiful Sydney autumn afternoon.

The Bach Akademie’s performance of this often-overlooked masterpiece was truly a treat. As always, Easton imbued in the ensemble her profound understanding of Bach’s genius and one hopes that it will only be a matter of years before the Bach Akademie’s Easter concerts become something of a Sydney cultural institution.