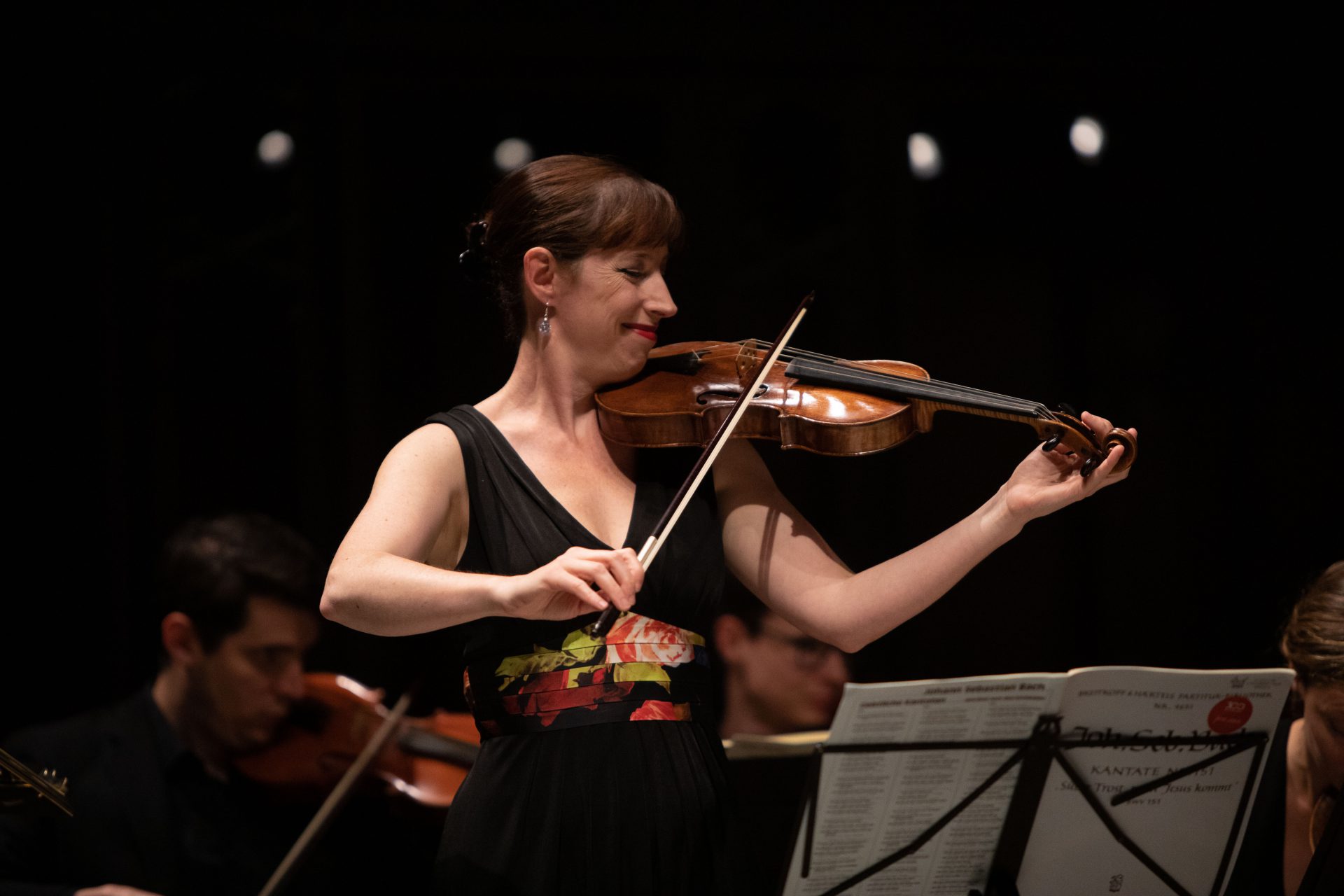 Speaking in 2006, Gustav Leonhardt – the great progenitor of historically-informed performance – stigmatised one-to-a-part Bach choirs as products of miserly passions rather than a dedication to historical accuracy: ‘The economic consequences have something to do with it. Think of the difference in the cost of air tickets and hotel bills!’

While that may be true of most cantatas, the Bach Akademie showed it was not so with Bach’s Actus Tragicus (BWV 106). That funeral cantata, with all its focus on contemplation and quiet thankfulness, calls for precisely the intimacy which the Akademie’s minimalist setting provided.

The cantata begins with a bittersweet sonatina which opens with the warm timbre of the violas da gamba – instruments which Bach reserved for the most impassioned of his laments, from Es ist vollbracht to BWV 198, the only other funeral cantata. The slow pace chosen by the performers brought out the dissonant interplay between the two recorders, rocking eerily, like cooing doves, between major and minor. That pace also allowed perfect timing throughout the entire sonatina, which is usually remarkably difficult for the recorders.

The vocalists break out, with great dramatic effect, into a celebratory four-part chorale – Gottes zeit ist die allerbeste zeit. The choice of a very fast pace did not bring out clearly enough the melismatic ‘weaving’ that accompanies the word ‘weben’. But it was nonetheless effective in reflecting the stark stylistic contrasts that characterise the entire piece, especially for the abrupt ending – ‘[in ihm sterben]…wenn er will’ – marked by something of a question mark.

The following aria – ‘Ach Herr, lehre uns bedenken’ – showed Richard Butler’s outstanding vocal control; and Andrew O’Connor’s booming voice brought out the stern tone of the godly admonition he sings – Bestelle dein Haus! – which is accompanied by quivering recorders and the especially dissonant chords played passionately by Neal Peres da Costa on positive organ. The heavily-contrapuntal movement that followed seemed to be a play on words – ‘Es ist der alte Bund’ is represented using the strict rules of the stile antico – and each voice is woven seamlessly throughout, though Cole seemed at times too forceful. As the bass contemplates the Old Covenant, the truly angelic voice of soprano Susannah Lawergren cries ‘Ja komm, Herr Jesu’ as each voice and instrument deliberately fades away, leaving Lawergren unsupported to trail away in a fragile arabesque which showed her incredible vocal dexterity.

A dramatic silence hangs in the Cell Block Theatre, and this silence, marked in the original score as a blank bar with a pause over it, is the exact turning point of the piece, after which all voices return one by one. Tension builds as the hymn ‘Mit Fried und Freud ich fahr dahin’ is introduced superbly as cantus firmus by soprano and countertenor, and the catharsis is a short and pointed ‘amen’, echoed sharply by the recorders – a miraculous way to end.

The concert was also an opportunity to showcase some of the solo repertoire in Bach’s oeuvre, which is not heard enough in concert settings. The first such piece was the Toccata and Fugue from Bach’s Keyboard Partita No 6 in E Minor played on harpsichord by da Costa. It is a dramatic piece that demands complete confidence and control. But this was at times lacking, attributable to an obsession with articulation, which worked wonders for the fugue but deprived much of the energy from the toccata. Nevertheless, the chromatic flourishes in the latter part of the fugue (redolent of the lively ‘early Bach’ pieces such as BWV 922) were executed with spectacular virtuosity.

Easton also shone in her performance of Bach’s Violin Partita No 2. The first two movements seemed too rushed at times, which led to many flaws and a lack of focus on dynamics. But the third movement was far more refined and relaxed with impeccable double-stopping and Easton brought out the dance quality of the Gavotte very well.

The Akademie came together again to finish the night with a performance of the 4th Brandenburg Concerto which was by far the highlight. Easton was flawless as both soloist and ripienist; the third movement’s cascading arabesques were played perfectly and with the fiery zeal they demand. And flautists Mikaela Oberg and Alicia Crossley played with great character and clarity and were rarely overpowered.

This diverse performance showed the streaks of individuality that colour the Bach Akademie. But it also showed that the Akademie is not just a sum of its parts; when they come together, they are imbued with a spirit that adds so much more.