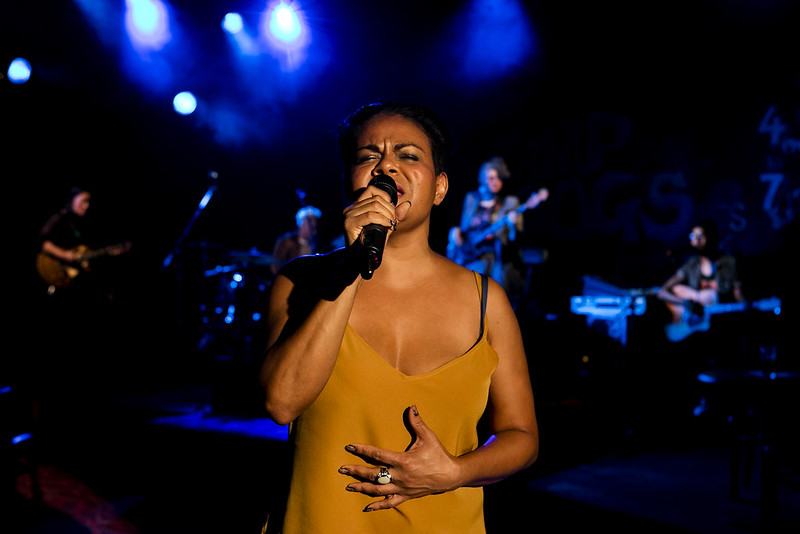 There are some shows that take your breath away. Between laughter and a few sneaky tears, I’m not sure I had any left after watching Belvoir’s Barbara and the Camp Dogs. Truly, I haven’t for a long time seen a show where I felt so engaged and connected.

Barbara and the Camp Dogs is a musical with as much power as theatre can have. Indeed, partly what makes this show so special is that it lacks the monotonous sentimentality that musicals often embrace. It follows Barbara (Ursula Yovich), an Australian Indigenous singer and her journey with her ‘sister’ René (Elaine Crombie) to their hometown, Katherine. There, she is shaken by past and present trauma in a raw and compelling set of events not alien to the experiences of many Indigenous Australians. There were references to the Stolen Generation, the Don Dale Detention Centre and engrained institutional structures in Australia. The suspense and tension, palpable throughout, make this performance a heartfelt telling of an established experience that cuts deep. For many, it will not be the easiest thing to watch – but for those willing to embrace it, it does great honour to our evolving Australian narrative.

Some pieces of theatre often do well being read about, but this is undoubtedly one you need to see to get its full impact. Why? You know that this isn’t just the story of Barbara and René. It’s a story felt by many Indigenous Australians, which is performed with such integrity by the all-Indigenous cast that it brings an original perspective to a highly-discussed part of our history.

On that note, the casting was excellent. Yovich, as the show’s lead actress and co-writer, puts on a breathtaking performance as Barbara, the synergy between her acting and singing flawless. The same can be said for Crombie’s stunning supporting performance. There is such a great authentic chemistry between these two performers; whether it be the combination of their sass and witty banter, or their riveting screaming matches, we are constantly kept on the edge of our seats. The songs, written by Yovich, Alana Valentine, and Adm Ventoura, were real bangers, with a great variety of music that really helped ground such an ambitious piece, aided by some very talented musicians.

It must be said, though, that many stories that have an authenticity like this one does can often suffer from an ill-defined narrative. However, I’m glad to say this was not the case here. The narrative arc was well defined and the pacing of the story was excellent, leaving the audience enough time to dwell on the substance of what had happened but not leaving too much as to potentially lose us. It allowed the tension to viscerally linger, adding to the power of the piece. As if they didn’t have enough commendation, Yovich and Valentine deserve even more for writing such a unique and well-crafted piece that sets itself above so many others of its kind.

Ultimately, I was very glad to hear that they have been touring Australia with this production; it’s a musical that needs to be seen by Australians for its great contribution to our collective story. I was thoroughly moved by this spellbinding performance. Everyone involved deserves congratulations for what they have created: a heartfelt piece that breaks the barriers of genre and storytelling.