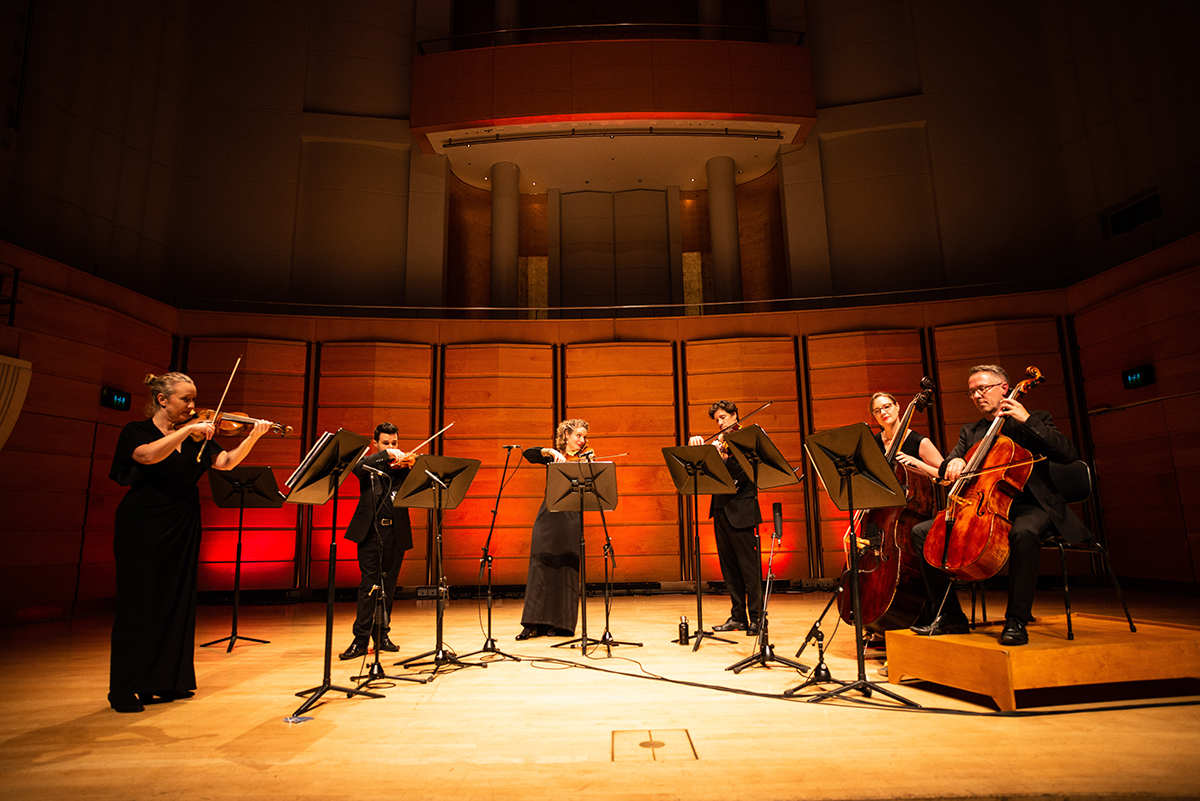 This concert was a celebration of the symphony as it had developed on the threshold of the 19th century. It was neatly arranged to show the stylistic progression from the archetypal late-Classical symphony of Wranitzky to the latent Romanticism of Beethoven’s Eroica.

First was Wranitzky’s Symphony in C Minor. It is a shining example of the ‘characteristic symphonies’ of the period and chooses as its subject the capitulation forced upon the Habsburgs by Napoleon’s victorious campaign in Italy. The first movement, entitled ‘The Revolution’, opens with a jarringly dissonant chord, continues with rapid contrasts in dynamics and soon marches into chaos. We can glean that Wranitzky was no revolutionary, and it would come as no surprise that the next movement is a Trauermarsch for Louis XVI.

Despite the absence of horns and timpanis, this chamber reduction still conveyed the piece’s revolutionary energy, and Matthew Greco and Skye McIntosh’s playing sul pont in some of the more brooding parts gave an ethereal glassy effect.

In Mozart’s Symphony No 40 we see the stylistic progression from the Classical to the Romantic well underway. And this is not only because of its stark opening, of which the Romantics later became enamoured – a wavering accompaniment by violas, played beautifully by Karina Schmitz and James Eccles. There follows a loud declamation of the next motif, and the very key – G minor – presents a tension with the structural elegance of this late-Classical symphony. The beginning of the next movement, marked Andante, bears an affinity with the more plaintive arias of the period; all the more so given the voice-like quality of Melissa Farrow’s performance on the flute. There emerges a contrapuntal build-up in the bass which the ensemble heightened quite well with a mild crescendo. In these two movements alone we see all the melancholy passions typical of the Romantics, without the formidable orchestral forces demanded by Mozart’s successors.

Beethoven’s Eroica followed the interval. It was an arrangement from 1810 for a more intimate setting by Girolami Masi, and was restored recently by Vi King Lim. It was a privilege to be able to listen to this rendition. In true Beethoven style, two booming chords set the scene. They were played with such effect that one would be forgiven for mistaking this for the original orchestral arrangement. The Marci funebre was a highlight, especially the beginning, when all the strings whisper sotto voce. It showed that the ensemble is best when it is at its most expressive.

The Scherzo features a light-hearted descending theme, punctuated by a delightful turn at the end –  which was executed with a tremendous sense of rhythmic unity by the ensemble throughout. A whimsical trio – here arranged for violas and the bass strings – was a reprieve from the emotional intensity that surrounds it. But when that cascading theme is later presented syncopated toward the end of the movement, marked ff, the ensemble made the contrast so stark that it descended upon the audience like a jagged thunderbolt.

There was clearly much thought behind this performance, and we look forward, as ever, to their musical narration of Haydn’s life in October, Haydn Speaks.