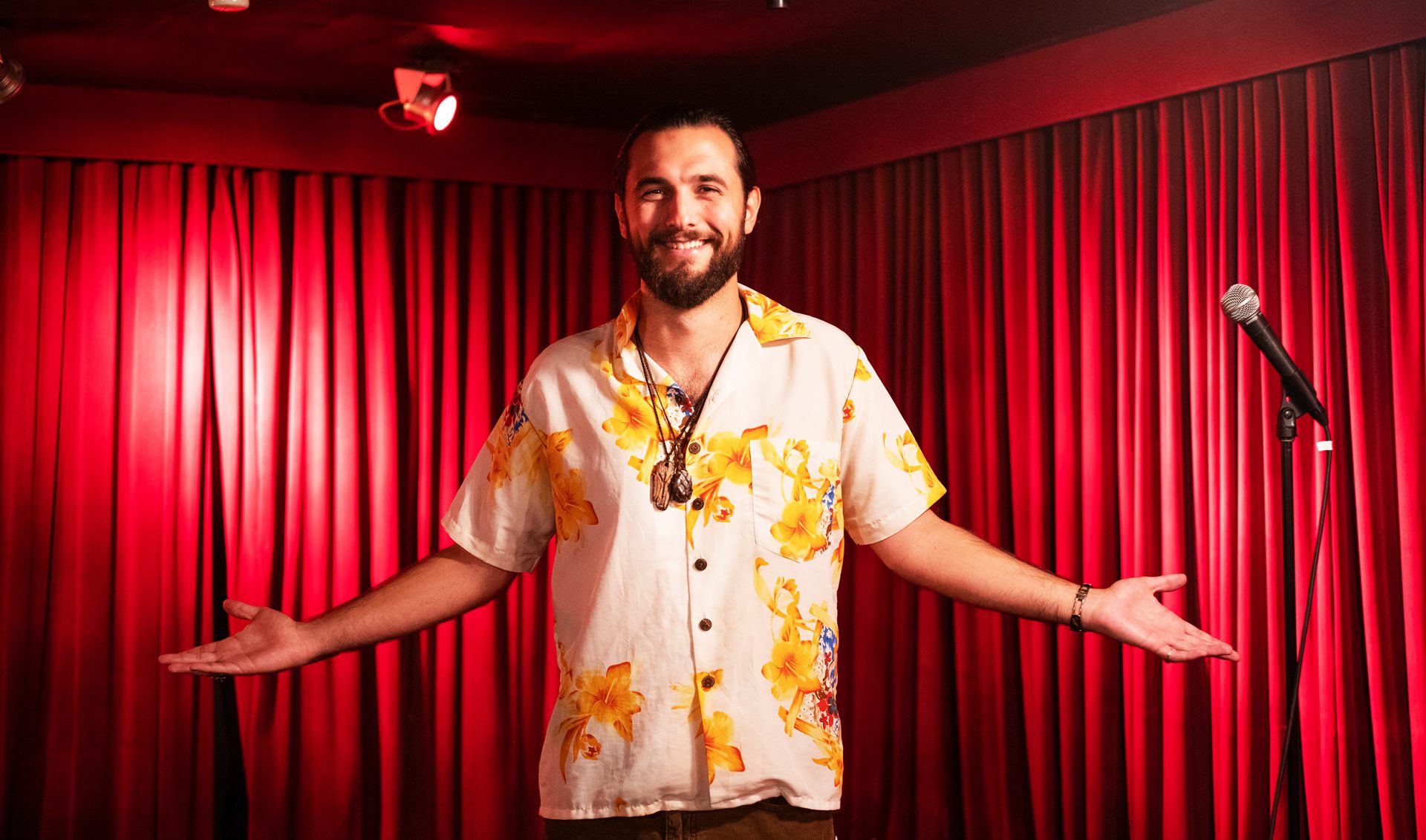 When you arrive at a funky looking shipping container in the heart of Marrickville, and you are greeted upon entrance to this shipping container with a strange mix of electronic reggae and dub music to see a show titled ‘Don’t Worry, Be Hippy’, you sense the need to expect the unexpected.

But when the show turns out to be a very standard, run-of-the-mill comedy routine – you can’t help but be left feeling a touch let down, even amidst an otherwise fairly entertaining and solid performance. This is precisely what I felt after seeing Marty Bright, which came towards the tail-end of the 2021 Sydney Comedy Festival and played at the Factory Theatre.

Interestingly, the night I saw Don’t Worry, Be Hippy, I had positively enjoyed myself. I distinctly recall the initial shock I felt realising that the show was in a literal container, as well as the many laughs I had during the night. However, I had much more difficulty in remembering tangible aspects of the show – such as specific jokes told or even pinpointing an underlying thematic concern of the piece. Perhaps my memory difficulties arose from the can of local craft beer I had drunk before seeing the show? Or maybe this forgetfulness was the product of Bright‘s set just not being quite memorable?

Good comedy lingers. It sticks with us long after the show is over. We remember the setup and punchlines to jokes years after they are delivered. We return to the joke time and time again, serendipitously whenever we are reminded of it. Mediocre comedy, however, is temporary. It is humorous and entertaining for a short epoch, but quickly dissolves like smoke. Bad comedy just is not funny – never and always. Don’t Worry, Be Hippy sits somewhere in the middle of that spectrum, sure to provide some cheap laughs but nothing more.

It was certainly very humorous. The small audience provided more than enough genuine laughs to fill the container, but most of the jokes delivered verged on clichéd. Is it any wonder that I found the show forgettable when premises of jokes ranged from how difficult the process of renting out a movie from Blockbuster was to how emojis are taking over our means of communication? I think not.

During the show, Bright gives us some insight into the title of his show. He takes us to a conversation he had with a friend, who suggested they found the title very demanding. ‘Are you telling me to be a hippy?’ the person apparently asked him.

Bright tells us that the title does not refer to being a hippy, but rather the intention to create an informal, somewhat free-flowing show. This explanation didn’t make much sense to me, and I still haven’t quite reconciled the title with his hippy attire, the reggae music at the start, and the fact that none of his jokes really related to hippy culture. What purpose do all of these background hippy references serve to the set? I think that the issue here is that Bright‘s unique personality and character do not get conveyed as well as they could have been, thereby leading to the issue of the jokes coming off as clichéd, as well as the show feeling disjointed at times.

Thankfully, however, these issues do not outweigh Don’t Worry, Be Hippy’s many strong suits. Of particular note here is Bright himself, who comes across as exceedingly charismatic, confident and likeable throughout the whole show. It was also excellent to see that he has the ability to adjust his performance on the fly, as any good stand-up should. He doesn’t dwell on jokes that miss the mark too long fishing for a laugh or reaction, instead he keeps the show receptive at all times and has a laser-like focus for finding where the audience is clearly engaged. I was also pleasantly surprised by his short performance of Jack Johnson on a ukulele at the conclusion of the show – Bright clearly has fine musical talent and a pleasing singing voice. I’d certainly be very keen to see another Marty Bright set in the future, purely for his awesome performance and presence.

One last aspect that should be addressed is the stage itself. The stage, being in a container, is incredibly confined – large enough to fit only one person very narrowly. This, of course, can be inherently limiting, especially considering that Bright is a talented performer with proven skills in physical comedy who I’m sure could have made use of a bigger space. I also thought it was much harder for him to properly engaged with the crowd, being that the container was so narrow but quite long. This resulted in cascading engagement of the crowd, with Bright clearly favouring those audience members at the very front.

Though it should also be obvious that confined spaces do have some potential positives for stand-up comedy, in particular the narrowness and tightness of the quarters can heighten the intensity of the experience of the show. Indeed, many great stand-up comics have long been fond of performing in small venues.

Overall, despite some very clear issues, Don’t Worry Be, Hippy is a very entertaining show. When Bright is on stage, it is a guarantee that you won’t feel bored or drowsy. Despite some of the criticisms have voiced here, I would be more than happy to see Bright again in the future and greatly look forward to whatever is in store for us from him in the future.