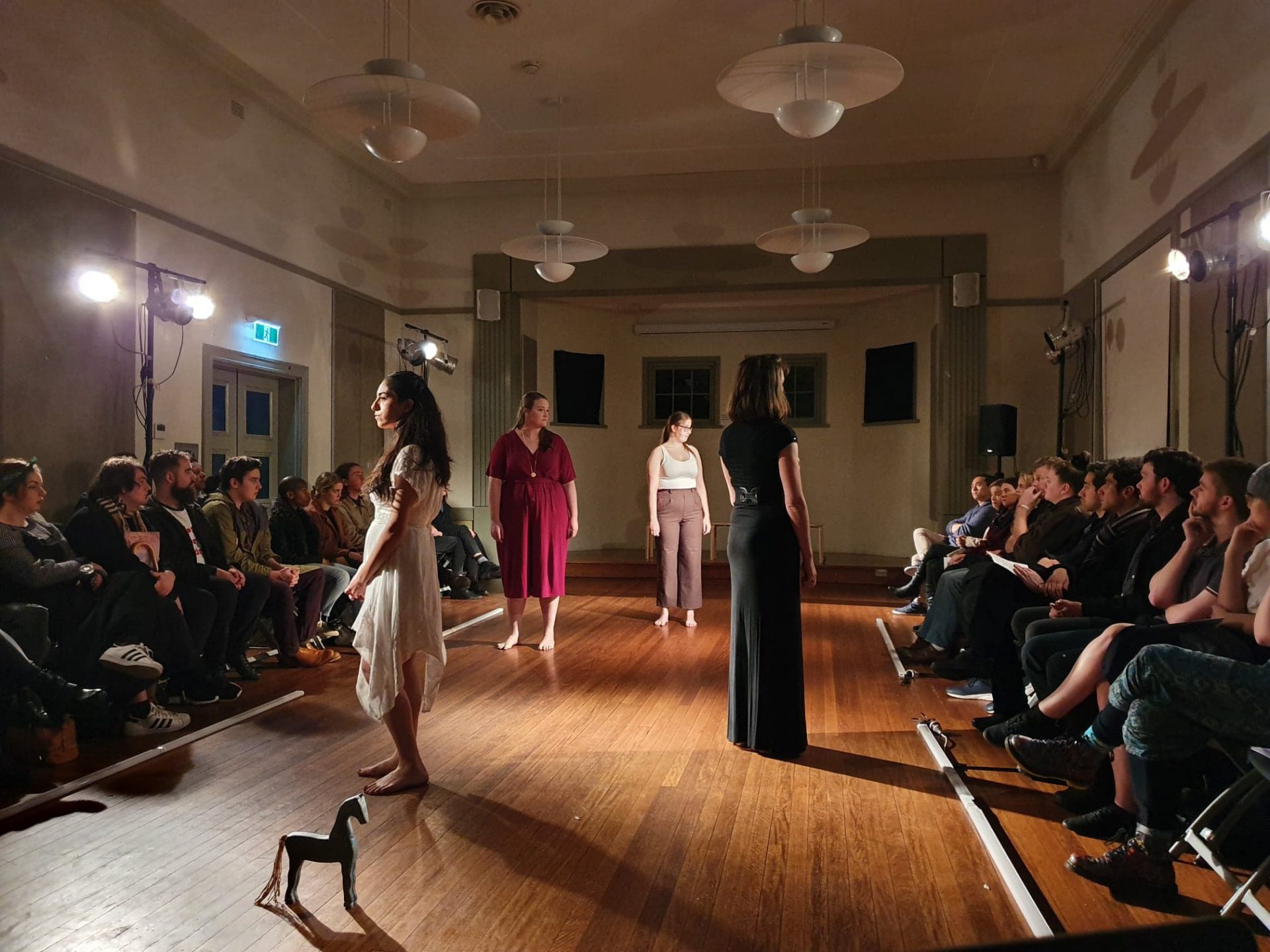 A genuinely powerful performance, echoing contemporary issues that must be discussed.

Yellow Handle Theatre Company’s Kallistēi, playing at this years Sydney Fringe Festival, is a clever appropriation of the ancient Greek tale of Cassandra of Troy.

Using the story as a strong platform for raising awareness about sexual harassment in Australia, Director Zoe Tomaras and Playwright Erin Middleton join forces to reinvent the telling of the Trojan war myth, using a dominant female voice to highlight the status of women not just in this tale but also the current status quo.

Following Cassandra (Ash Richardson), the story is placed in the days before the Greek invasion of Troy. Cursed with visions no one believes, she finds solace in the Goddess Athena (Rhiaan Marquez). Falling in love, the two decide to act; Athena rallies both Cassandra to rise up and speak her truth and the other Goddesses to change the status of women across the world.

Ash Richardson formed a strong lead role, creating a character who was bold, outspoken, and proudly making those around her aware of her issue with patriarchal structures. The sometimes brash character resonates profoundly with audiences by the end of the show, with Tomaras’ well-constructed staging allowing for a touching direct-to-the-audience monologue to tell the final moments of Cassandra.

Yet, the strongest moments of the play lie in its choreographed modernisation of the ancient Greek chorus, describing the pressures women currently face and drawing attention to the prosecution rates of sexual assault in Australia. Combining stylised movement and dialogue with confronting statistics, the strength of the female cast in these moments indicate the sophisticated way the play grappled with these difficult topics.

However, in pursuit of prioritising their message, they overlooked an authentic male depiction – which in turn could alienate male audience members who strive to be part of the solution.

Indeed, Cheng Tang (playing Hector/Paris/Menelaus) and Tim Kemp (in the roles of The Judge/Apollo/Agamemnon) both seem to battle the often two-dimensional characterisations of their characters, with even key emotional developments between them being overshadowed with repetitive and demining dialogue that denied any authentic male presence within the show.

On a final note, the use of the Emerging Artists Sharehouse at the Erskineville Town Hall was cleverly constructed, with its runway-style staging a satisfactory employment of the space. Props to sound design by Bradly Lee for elevating the performance, highlighting the potential of creativity within any space.

Overall Kallistēi presents a strong and provocative performance that had this writer deeply frustrated with the clearly broken system designed to deal with sexual assault. It is is a prime example of the sophisticated theatre to come out of this year’s Fringe Festival and I am deeply excited to see what else each member of this team will bring going forward.