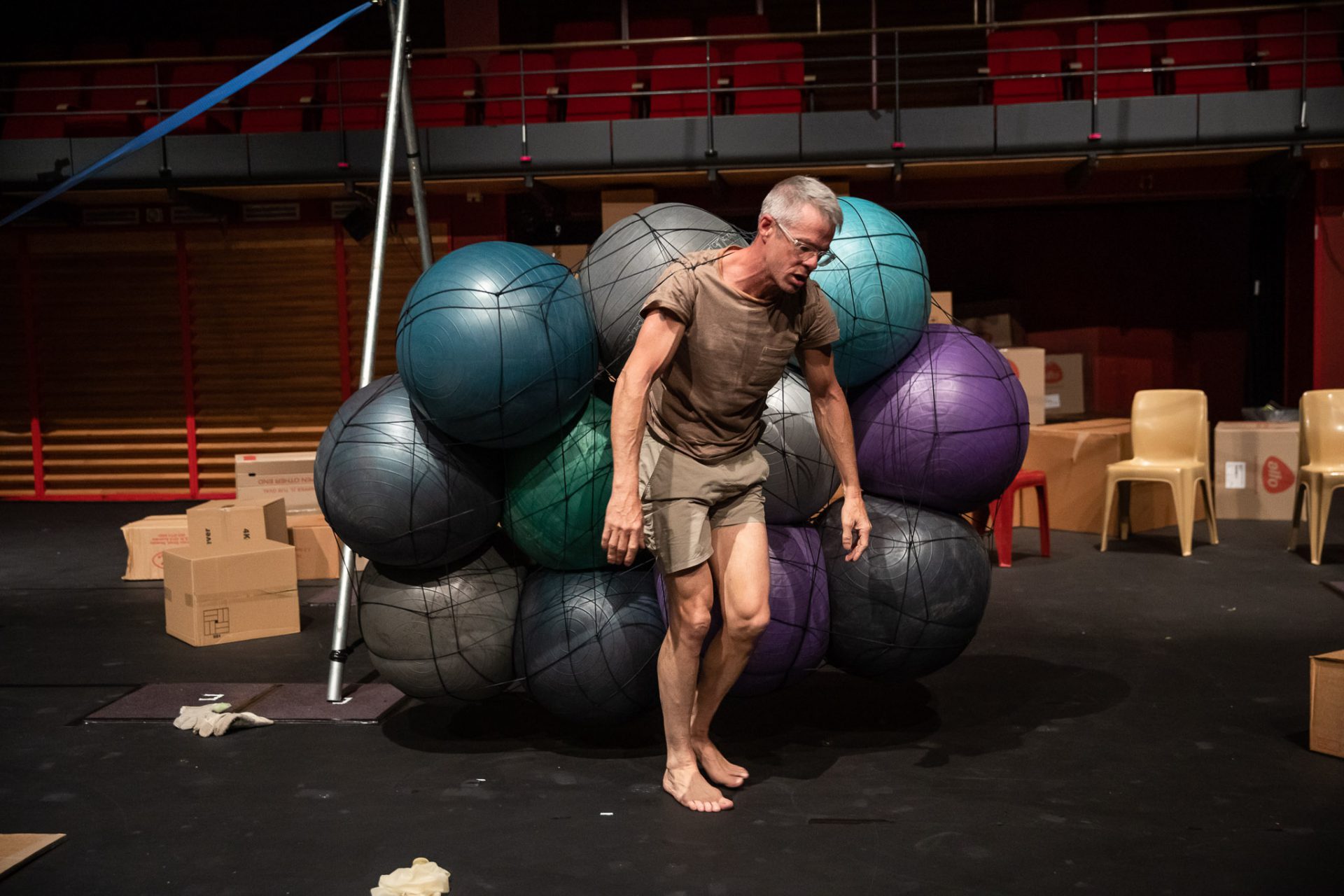 High Performance Packing Tape, a show about a man (Lee Wilson) who transforms hardware such as duct tape and cardboard boxes into arenas in which he performs several stunts, has an undoubtedly interesting premise.

But one which ultimately misses the mark.

Finally, the balloon pops. Seconds elapse until a confused, half-hearted clap emanates from the audience.

Unfortunately, it doesn’t get much better from here.

The rest of the show reuses the formula of this starting sequence. Each stunt is performed in the same general way, with Wilson spending an excruciatingly long amount of time preparing for a stunt by performing repetitive tasks – such as blowing up a balloon, wrapping tape to rig a tightrope, or slowly piling cardboard boxes.

We can also see why Wilson chose to do this, both symbolically and for dramatic effect. If these preparations had led to marvellous stunts being performed, then the wait would be well worth it, heightening the excitement of the stunt to be performed and reflecting the industrial, sterile theme that the show wishes to explore.

Shamefully, the long build-ups lead to nothing other than anti-climactic disappointment as the stunts largely fall flat.

In one stunt, Wilson walks across the duct-tape tightrope he furnished before the audience. In another, he climbs to the top of a relatively short pile of cardboard boxes and falls through them; with the cardboard boxes clearly arresting his fall.

The sense of palpable danger or excitement that one would expect from such a show is sadly absent, as there isn’t anything making these stunts perilous. Rather, much of the audience was left awkwardly giggling at the end of these stunts – hardly an unwarranted reaction in the circumstances.

Indeed, the most memorable part of High Performance Packing Tape came from its final scene. In it, Wilson undresses and affixes himself to the ceiling in a duct-tape cacoon which he uses to swing himself at high speed across the stage. He later employs a box cutter to cut the tape and free himself.

If anything, this final scene shows us what the rest of the show could have been – a literally ballsy and exciting high-impact performance. There are a few other moments in the show which also stand out like this, but ultimately they’re too few and far between to redeem the show.

However, the sound design and visual art elements – credit to Phil Downing and Mickie Quick respectively – was good. The strategic placing of microphones so as to amplify the industrial, grungy sounds of the show truly pop, and Downing’s use of similar sounds in creating background music for the scenes complemented the onstage performance well. Wouters was highly effective too in her use of lighting – using sharp shadows and lighting to perfectly realise the theme of the show.

Ultimately, High Performance Packing Tape has potential, as evidenced by its ending. Sadly, much of the show is far too gutless and tedious to make it worth recommending – particularly in its first half.