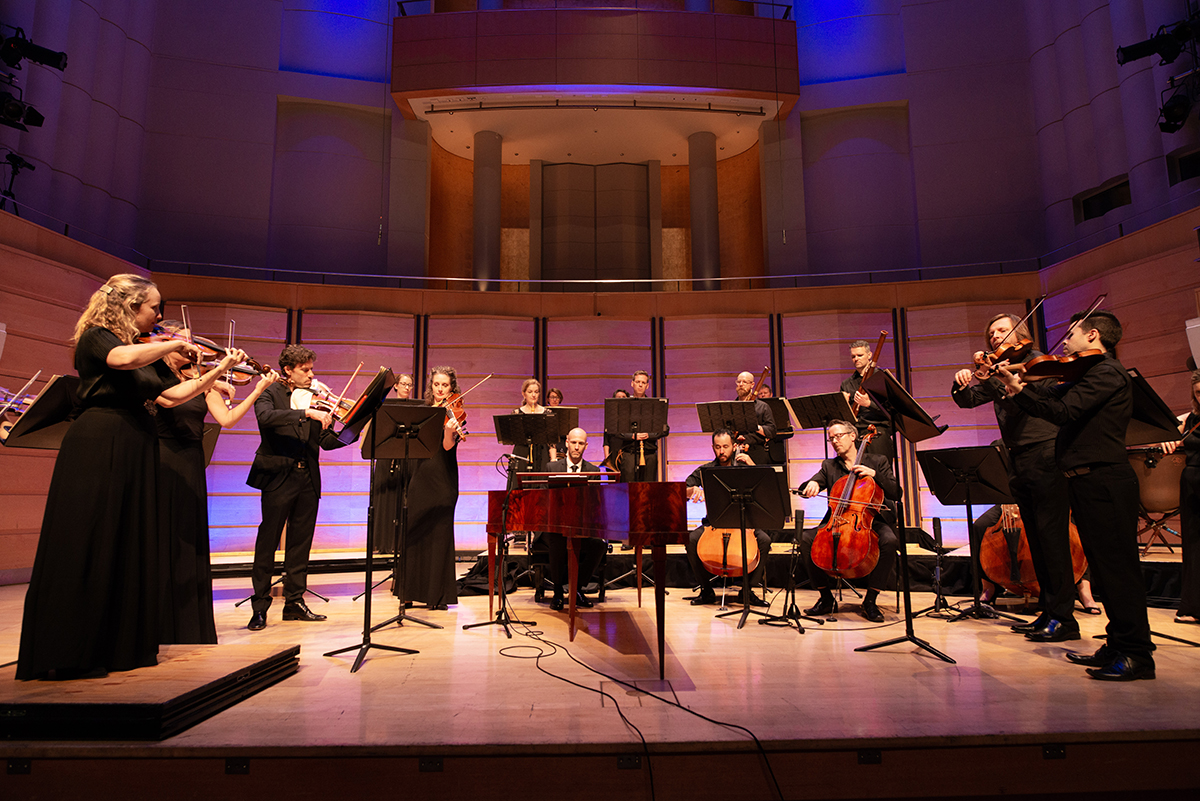 Haydn’s Symphony No 25 in C Minor was the first piece on the program. The opening consisted of a rather awkward, but ominous, series of five notes. It was played with all the vitality and force that one would expect of the opening of a Haydn symphony. The intervening sections between the repetitions of that motif were performed by the ensemble in a way that deftly highlighted the stark dynamic contrasts so typical of the genre, emphasised by Haydn’s directions – rapid fluctuations between forte and piano in almost every bar– in the original score. After some brief flirtations with counterpoint, the brooding nature of the motif is lost in a rather whimsical series of triplets and tremolos. The style becomes light and galant and gives the impression of a divertimento. But the attempt at contrapuntal development reappears in the second movement, which consists of surprisingly diverse variations – from chromaticism to leaping passages – on a mellow and elegant theme.

One is left wondering how at all the movement began in C Minor. That is until the menuetto. Deceptively beginning sotto voce, the opening breaks out into a rousing motif in minor mode, foreshadowing the waltz. It is very easy to perform this intense and forceful movement as though it were a march. But once again, the ensemble manoeuvres the rapid stylistic contrasts – false starts, protracted silences, and interrupted cadences abound – in a way that is so effortless and skilful that the audience is left with the impression that the symphony was composed for the Australian Haydn Ensemble itself.

And this is to say nothing of the Trio. The Trio consists of a torturously difficult series of leaping passages for the cello, punctuated by pizzicato in the strings section. It was no match for Daniel Yeadon, who played flawlessly and in a way that made the cello sing in a way as natural and mellifluous as the human voice itself.

This put the bar high. But the highlight of the night was Mozart’s Piano Concerto No 21 in C Major. It is one of Mozart’s more thoughtful and diverse compositions. It balances forcefulness, elegance and wit with perfect ease. After a brooding entry, the horns spectacularly announce something of a regal fanfare, and the strings follow with a series of shimmering tremolos as if to warn us that what follows is no mere tafelmusik.

Erin Helyard, playing the fortepiano, makes his entrance by way of an incredibly long trill. It is a treat for modern audiences accustomed to the clinical and perfected sound of the concert Steinway – what historically-informed performers call ‘The Black Beast’ – to hear the varied timbre of the fortepiano. It is, by far, softer. But it is always a pleasure to hear the distinct buzzing of the bass and the tinkling of the high treble that is unique to the fortepiano. That variety of sound was laid bare for the audience in Helyard’s extended solos, which were reminiscent of the celebrated cadenza in Bach’s fifth Brandenburg Concerto and which traversed the entire range of the keyboard. They were largely improvised, and skilfully so, masterfully drawing on the main themes scattered throughout the concerto’s opening.

This is consistent with Helyard’s unfailingly-scholarly approach to performance. One must not forget that it was Mozart himself who improvised when he first performed the piece on fortepiano in 1785, whereupon Franz Niemetschek, renowned music critic of his day, remarked that Mozart’s improvisations were of a level that ‘captivated every listener and established Mozart as the greatest keyboard player of his day’. More than two hundred years on, much the same could be said of Erin Helyard.

The intimate scale of the ensemble also made it easier to appreciate the bassoons, played faultlessly throughout by Simon Rickard and Brock Imison, during the strings’ soft chromatic rises. The Andante was based on the simplest of materials, but was one of the most effective movements – heart-rending dissonances giving way to soft triplets in the strings. Bearing all the frivolity of an opera buffa, the third movement had a clear affinity with the style of Hadyn – playful, energetic and at times bombastic.

The last piece was Mozart’s ‘Prague Symphony’. Echoing Leopold II’s earlier injunction, the musical cognoscenti of Prague had once complained that Mozart’s string quartets were ‘too highly seasoned’. The first movement of this symphony shows that Mozart took no heed. It begins sparsely enough, but the harmonisations become increasingly dense, the changes in dynamics become more abrupt, and there are sinuous passages that call on the strings to rapidly twist and turn on a scale. This put the versatility of the ensemble’s strings section on full display. The last two movements were an opportunity for the flautists, Mikaela Oberg and Melissa Farrow, to shine, and they played, as always, with great clarity and affect.

For most members of the audience, this would have been the last concert of the year. And what a grand way to end. But for the Australian Haydn Ensemble, it was the first concert after almost two years of interrupted seasons. After this performance one can only imagine what Sydney audiences missed out on in that period, but we look forward not only to another year of skilful musicianship delivered by the ensemble in live performance, but also to a recording of Mozart’s works that is currently underway.