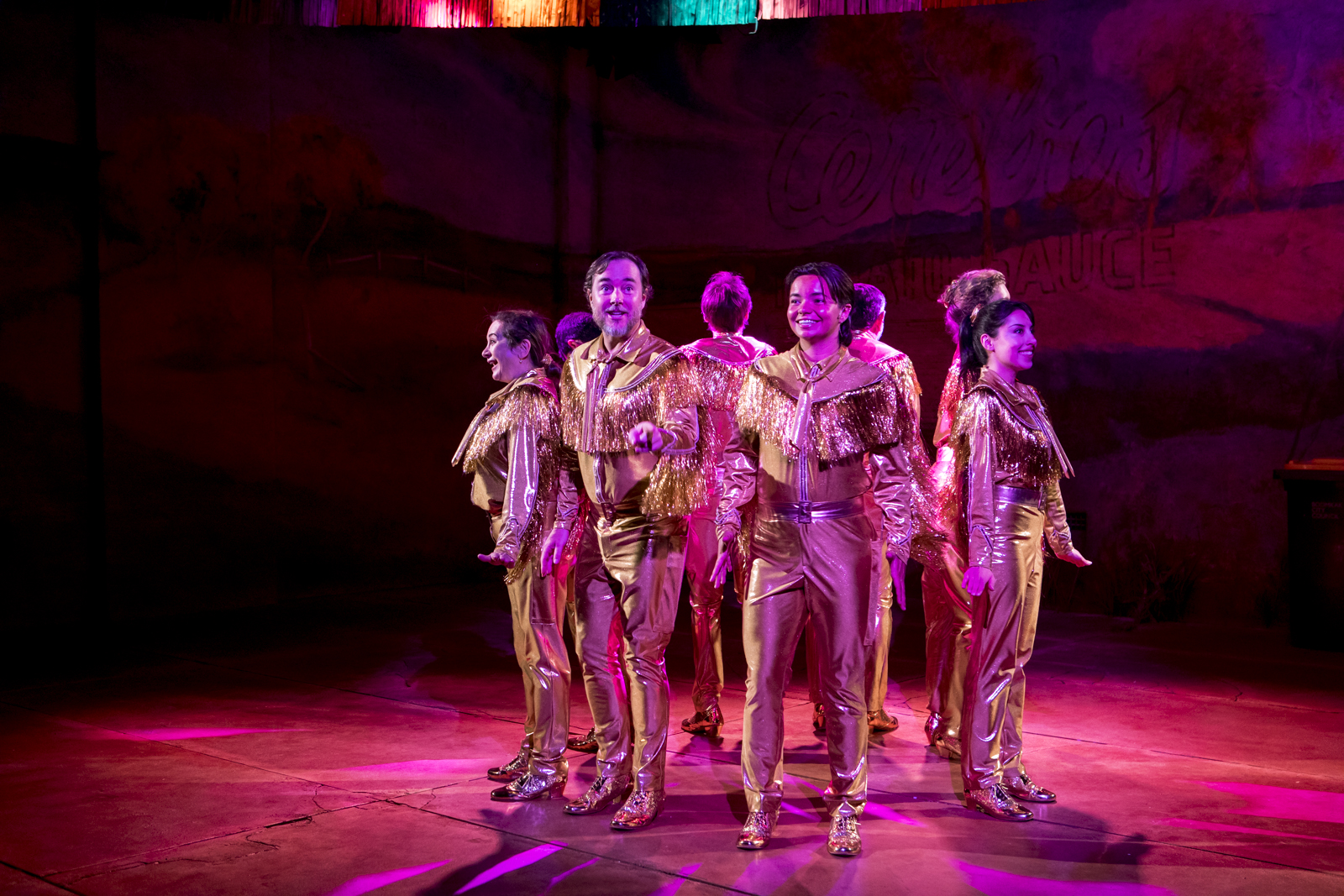 Part pantomime, part play, Belvoir’s final production of the year offers a little bit of everything to its audience.

Walking down the infamous steps to Belvoir‘s Hal Bar, it all hits me. The events of the day have worn me out. The rain outside has soaked what I’m wearing. Christmas season, and the Mariah Carey/Michael Bublé onslaught it entails, is approaching with rapid pace. Now more than ever, I need something to take the edge off.

And that’s what The Boomkak Panto, written and directed by Virginia Gay (with co-Direction from Richard Carroll), delivered.

The plot of The Boomkak Panto is simple: to save their regional NSW town from scary Sydney-based property developers, the residents of Boomkak put on a show to raise funds. Opting for a crowd-pleasing moneymaker, they decide to put on a ‘panto’; a seasonal performance of a classic fairytale replete with cheap gags, audience participation, and live music. As production begins the truths come out, and we are exposed to the gender, sexuality, and cultural struggles faced by each character.

Co-Director Richard Carroll describes this show as a ‘panto-inside-a-play-inside-a-panto’ and that’s exactly what we get. Cheesy puns and double entendres are littered throughout the performance, with audience members regularly invited to contribute through boos, heckles, sing-alongs, and applause. Other elements of panto theatre – such as topical humour and gender-crossed performances – are also present. The fourth wall is more demolished than broken, and metatheatrical references to each performer’s career, the travel habits of our Prime Minister, and the city lifestyle are funny for those both in and out of the know. Without a doubt, I’ve never heard as much applause or laughter in a theatre as I did during The Boomkak Panto.

If the cast were to be summarised in one word, it would be superb. Virginia Gay wrote this play with performer Zoe Terakes in mind, and it’s clear. Zoe‘s character is named after them, and the challenges that their character experiences – from having their correct pronouns recognised to convincing their female love interest to express her sexuality openly – are imbued with a truth only accessible through lived experience. Similar truths are also on show (albeit on a smaller scale) through Darren (Billy McPherson), Boomkak’s key First Nations presence, and Parnia (Deborah Galanos), the conservative mother of Yazmin (Mary Soudi), Zoe’s love interest.

That being said, there’s much room for silliness. The show peaks any time Rob Johnson is on stage; whether he’s playing Butch, Boomkak’s resident alpha male, or BD, the comically villainous property developer attempting to gentrify the town, he can barely finish a line without it being drowned out by the audience’s enthusiastic response. Blink-and-you’ll-miss-them lines from Hamed Sadeghi, who spends most of his time playing a long-necked Iranian lute, are moments to savour, and Toby Truslove‘s John is a crowd favourite.

Throw in a stunning second-Act musical performance from Virginia Gay and you’ve got an outstanding all-round cast.

Yet, within all the hype, something feels missing. Much of The Boomkak Panto‘s run time is dedicated to its audience-pleasing elements, neglecting moments of stillness and reflection for moments of cheap comedy. If the show was just a panto, this would be fine. But a key second Act moment between Terakes and McPherson reveals that it’s more than that; that there is a depth to the characters which we don’t see enough of. Should the show have let itself slow down and not get lost in its numerous goals, a lovely opportunity for rumination would have been available – increasing the power of what is ultimately presented.

In any case, The Boomkak Panto is nothing short of a romp. No matter what type of day you’ve had, how wet it is outside, or which annoying Christmas song the radio is playing, there’s something for everyone in the small town of Boomkak.