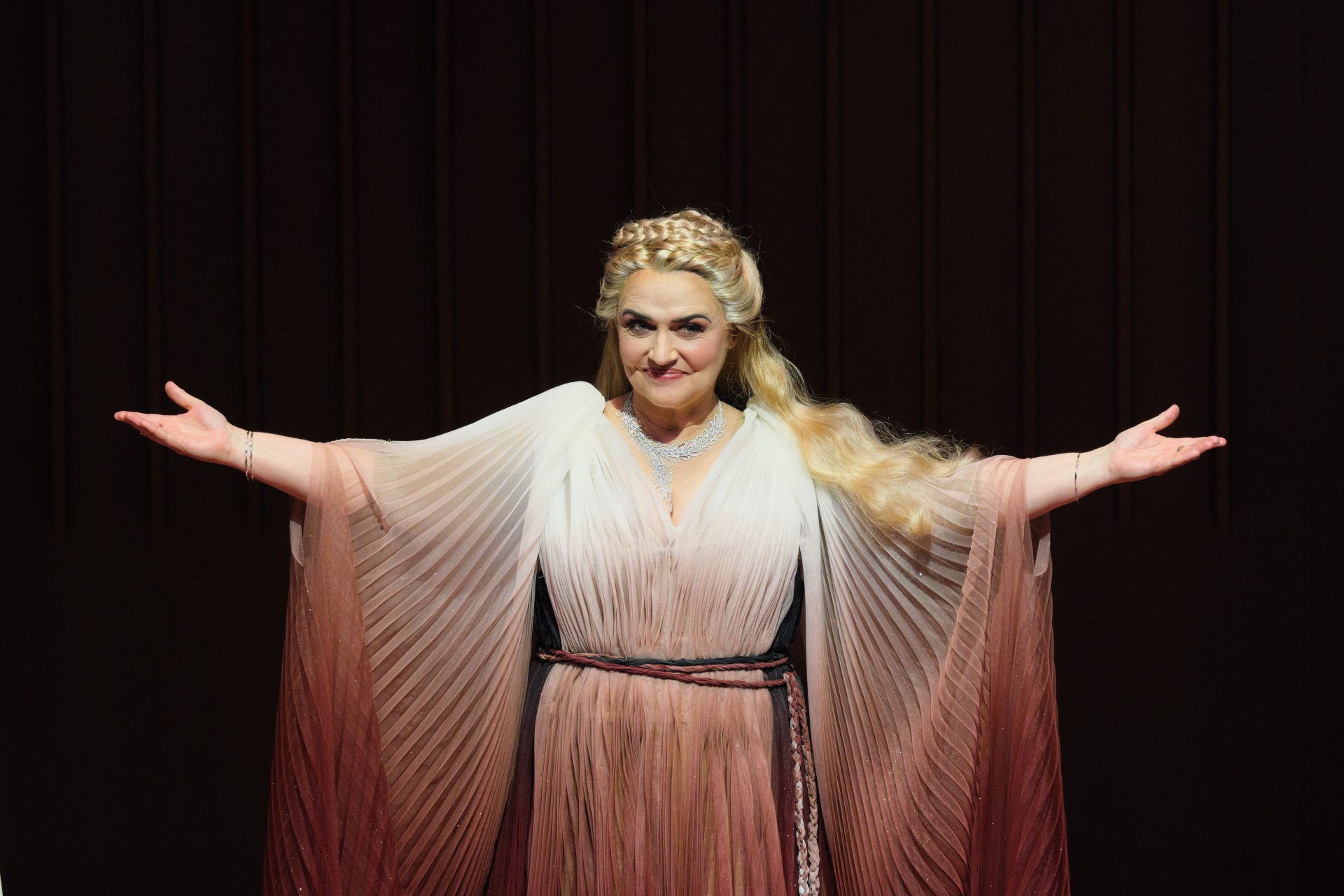 With the first burst of that typical Handelesque French overture, the audience knew it was in for a treat.

The tricky sinuous flourishes in that overture, which demanded unity between winds and strings, were executed well by the Canberra Symphony Orchestra.

The stage opens with Melisso and Bradamante (disguised as her brother, Ricciardo) who arrive on the island conjured by the sorceress, Alcina. Jud Arthur, as Melisso, was impeccable from beginning to end, and had a clear booming bass voice that pierced through the vast concrete cavern that is the Llewellyn Hall. Because Sally-Anne Russell was unwell, the role of Bradamante was sung by mezzo-soprano Cassandra Seidemann and walked by Zsuzsi Soboslay. What would have been an otherwise awkward split was arranged neatly, and Seidemann sang well throughout. There were a few unintended trips over the apparatus on stage but these were convincingly internalised within the narrative by both Soboslay and Rachell Durkin.

Rachell Durkin then emerges as Morgana. Even from her first aria – O Sapre Al Riso – she had the opportunity to showcase her quivering coloratura. Her stage presence throughout was captivating and propelled the narrative forward, particularly in the amusing amorous scenes in the final Act. Much the same could be said of Emma Matthews as Alcina – the opera’s Prospero – whose performance was redolent of La Stupenda herself. She emerged onto a set that was minimalist but worked well. The addition of dance – a originally intended for Marie Salle, a famed dancer of the Baroque – added a refreshing dimension to the performance and the choreography, by Jodi Ann Hammond, was thoughtful and engaging.

The narrative was at times difficult to follow. This may be attributable to the fact that the surtitles only gave a summary of the meaning of each aria or recitative. Nevertheless, there is something to be said for this, because it gives a general impression of the narrative and does not distract that audience’s attention every few seconds from the stage.

Though the narrative in Alcina may be wild and complex, the music is delightfully simple. A testament to the imperiousness of some of the early great castrati, Carestini is reputed to have refused to sing Verdi prati because he considered the aria an insult to his virtuosity. Russell Harcourt’s performance as Ruggerio showed the different sort of virtuosity this aria demands. His control and the crystal clarity of his voice was on full display to Sydney audiences in Bach Akademie’s recent concert In Bach’s Orbit, and it was equally so here. His is a voice that can truly tell a story, and where better to do it than it such an introspective ‘freeze-frame’ aria as Verdi pratti.

Though Handel’s tunes may be simple, that is not to say they are not catchy. For example, how could one resist whistling the tune to Morgana’s aria Tornami a Vagegghiar – which Handel seemed subtly to have used as a motif throughout the opera – upon leaving the hall?

John Longmuir did incredibly well as Oronte – Morgana’s lover. What Gardiner had once called the ‘dull patter of recitatives’ in late Baroque operas was nowhere to be seen. The vitality and energy Longmuir brought to the role was matchless, and the sheer declamatory expressiveness of his style was redolent of the performance style expected of recitatives in the early Baroque, modelled as they were on ancient Greek drama. Peter Coleman-Wright mercifully spared the audience of the repeat sections of the many da capo arias in this already-long opera. This kept the dramatic pace on a roll.

It was particularly in the last two Acts that audiences could appreciate the force of Katrina Wiseman’s voice as Oberto. Wiseman did well in channelling the timbre of the original boy soprano for which this role was originally intended. She had a delightfully delicate child-like tone and her acting was expressive and engaging.

Special mention should be made of Morgana’s aria Credete al mio dolore. The heart-rending introduction on cello was played expressively throughout and Durkin rendered her sudden mood-change to a lament in a way that was more convincing than whimsical (as some performances would have it).

This performance was a delight for Canberra audiences and it is a testament to the promising future of National Opera.