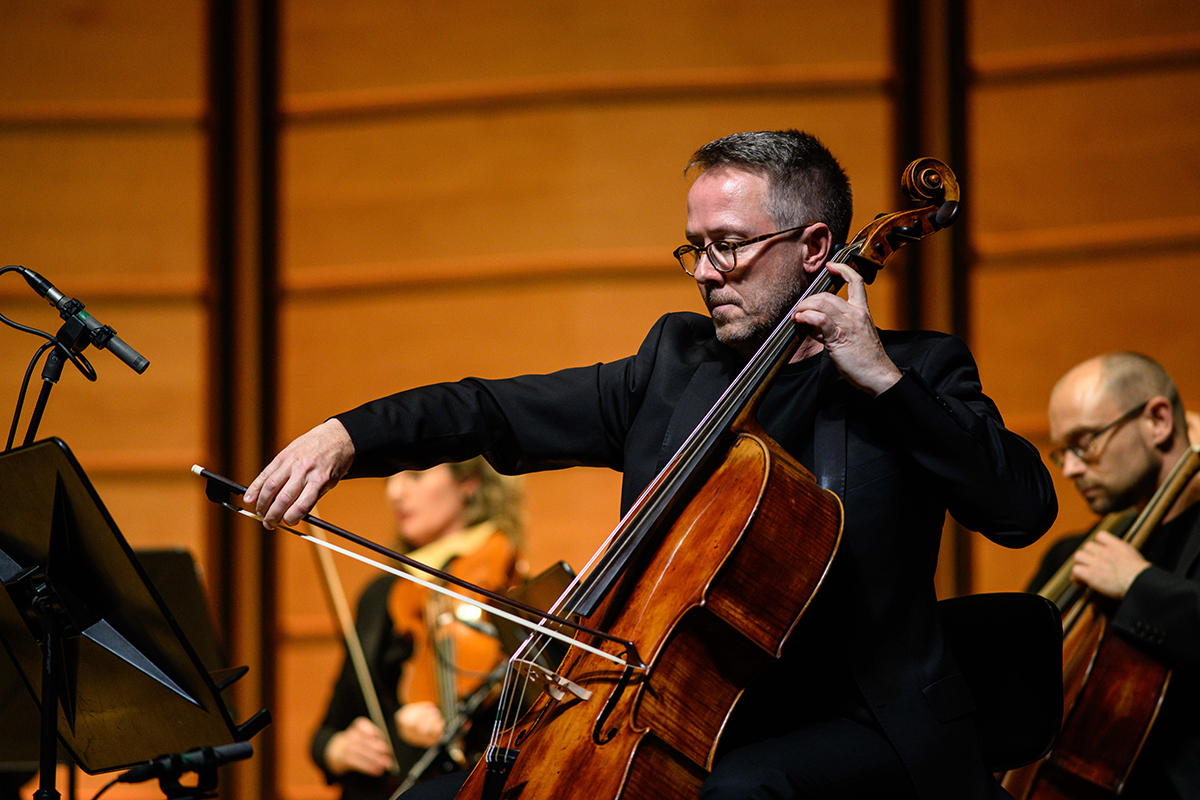 The concert began abruptly with the fiery beginning of C.P.E. Bach’s Sinfonia in C major (Wq. 182, No. 3). It is something of a fantasia, with the rapid turns of character and tempestuous running passages, mediated only by brief brooding soft passages, that are emblematic of the empfindsamer stil. Then the ensemble breaks out into something of a lament ground on a chromatic bass. The loud chords were played with great effect particularly by Matthew Greco on the violin, and the entire strings section shone in the rollicking triplet passages in the Allegretto. The ensemble did well in giving variety in dynamics to each part of every movement in such a way as to keep the audience on the edge of their seats. One gets the impression that Chad Kelly and the ensemble really understand this kind of music.

Sticking with the tonality of the preceding piece was William Herschel’s Sinfonia No 8 in C minor. It is a curious piece that begins with something like a Slavonic dance that is propelled eerily by the bass. This dance element was realised well by Kelly, who made each iteration of the theme gradually faster. The Allegro assai is a remarkably energetic movement, replete with shimmering repetitions of a cascading series of notes; and so it was a perfect match with Kelly’s vitality as a conductor. All this is not to mention the Presto assai. Interjections from the bass strings seem to imitate the battle cry of a bugle in a way that is reminiscent of the early Baroque Battaglias, before they are rounded off by the quaint cadences that are to be expected of music of the Classical period. This is not surprising once we appreciate that Herschell, whose father was an oboist in the Hanover Military Band, emigrated from Hanover to England where he became the first bandmaster of the ‘Durham Militia Band’. These interjections were played with guttural force by Martin Penicka on cello and Pippa Macmillan on double bass, to great effect.

C.P.E. Bach’s famous Cello Concerto in A major (Wq 172) was next. The lively introductory section was played well by the ensemble but the real star of the show, as was to be expected, was Danny Yeadon on the cello. His playing was at all times expressive and, in large part, technically faultless (though there were some minor slips when reaching to the lower part of the fingerboard). His selective use of vibrato made his instrument sing, and he was never overpowered by the vaster forces that surrounded him. The Largo was particularly beautiful, and the Allegro assai was a playful dialogue between the cello and the ensemble, here presented as equals.

After the interval came J.A. (Georg) Benda’s Harpsichord Concerto in F minor. It was a smart and delightful addition to this program that fit in stylistically. Kelly did will in performing the harpsichord all while guiding the ensemble through the rapid changes in dynamics expected of the ensemble. These changes in dynamics were even realised on harpsichord, with Kelly making smart use of the registrations on the original Kirkman harpsichord. The harpsichord solos were giddying feats of virtuosity. Kelly negotiated the fast curves of the running passages with great ease, and he has an exhilarating staccato playing style that made for clear articulation. There were also some tasteful virtuosic improvisations.

Despite the several thousand other pieces he had composed, it is evident that by the time he composed the Overture Suite in G major, La Bizarre, Telemann had not yet exhausted his faculties of musical invention. We are treated first to an ouverture in the French A-B style, and then a grand courante. The Gavotte en rondeau strayed as far from its dance origins as possible, and the ensemble here played it at an exhilarating speed. Whimsical running passages performed like a gust of wind by Skye McIntosh made the Sarabande live up to the title ‘Bizarre’.

It would be remiss of me to conclude this review without commending the curation of this concert’s program. Much thought clearly went behind the selection of pieces that would be historically interesting and yet open to new interpretations that would excite modern audiences. It shows that this ensemble is more than just Haydn – an ideal that looks to be continued next year with this ensemble’s exciting aspiration to put the early Baroque and classical periods in dialogue with one another.