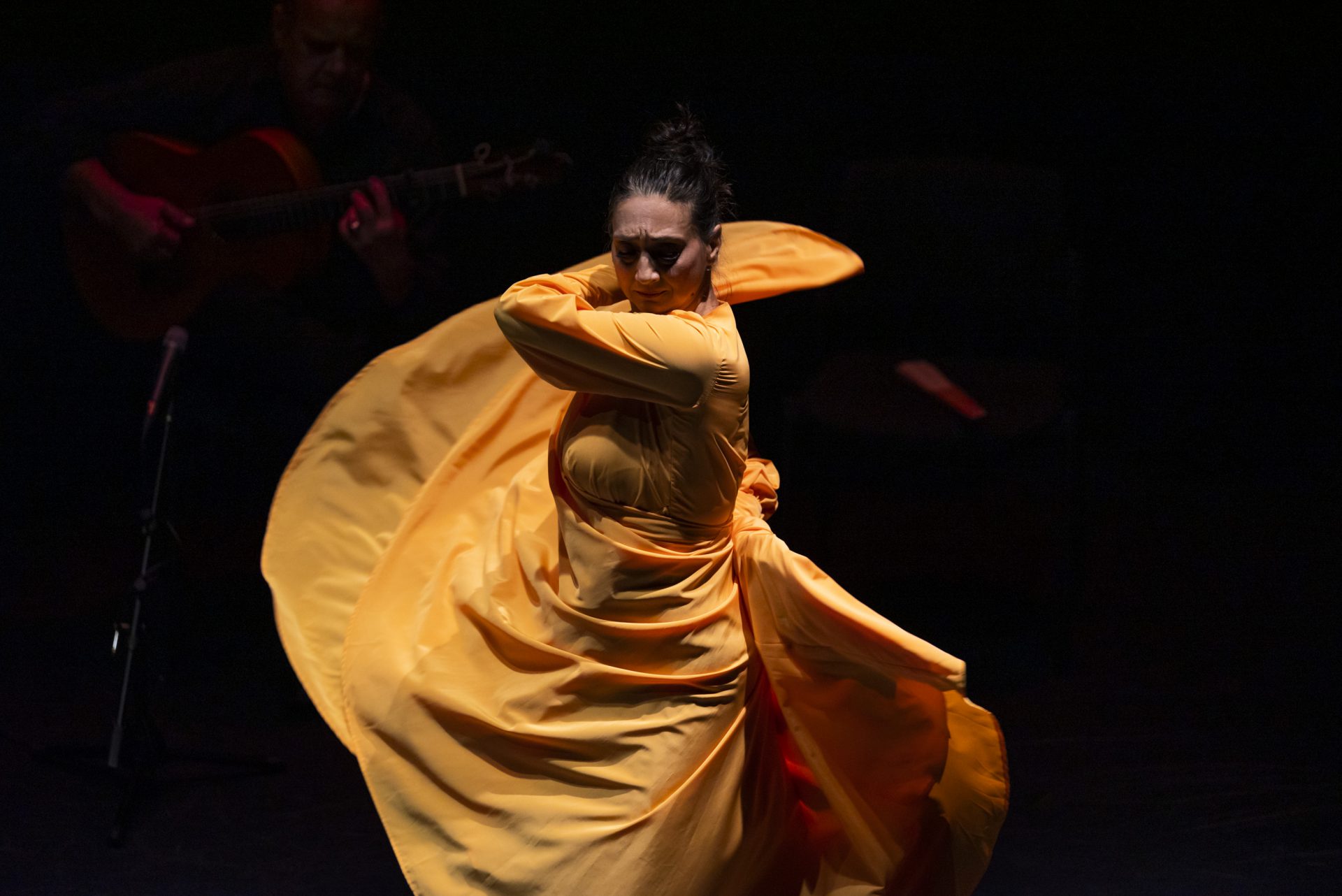 Fun and flavour ensue in this exploration of COVID, community, and culture.

It’s 2020, and New South Wales has entered its first lockdown. Everyone is feeling the stress of being cooped up, but especially Annalouise Paul. She’s a dancer by trade, specialising in the niche form of Flamenco. It comes from Andalusia (in southern Spain) and is typically performed in the area’s open streets. Paul, separated from her community back in Europe, must settle for a shabby demountable verandah.

“Locked down, locked out“, she says in a voice-over played across the theatre.

But she’s not locked down anymore. Flamenco for Everybody, detailing her experiences during isolation, is a celebration of community and post-COVID life told through the Flamenco art form.

The performance can be divided into two sections: moments with audio-visual production elements, and moments with live music. Throughout the former, a voice-over spoken by Paul narrates her life during COVID. In the latter, a group of three musicians trained in Flamenco music perform (Angel Mellado, Ricky Kugler, Robbie Varga). Paul dances throughout both of these in her traditional Flamenco shoes, her feet tapping rhythmically across the bare stage. Her body movement is intriguing; sways and turns, expressive gestures but a controlled, focussed facial expression. When combined with a billowing flamenco dress (which Paul wears many of throughout the performance), it tells as much of a story about isolation and connection as the projection and music behind her.

Worthy of key emphasis here, though, is Angel Mellado. He primarily performs Cante Flamenco (Flamenco singing) throughout the show, mostly in his native Spanish. As he progresses through the evening’s program, which covers tangos, sevillanas, and a fandango with lyrics he himself wrote, there is a genuine emotionality and expression in his voice. His ability to engage an audience is also unmatched; the rare moments he speaks to the audience, wonderfully combining humour and history, bring great joy. Given the visual spectacle Paul‘s dancing is, this is no easy feat.

However, it must be noted that this show is not an introduction to Flamenco. Those unfamiliar with the art form risk being confused by the performance. Thus, it is advisable to have some working knowledge prior to attending. Though a post-performance Q&A offers the chance to learn more about Flamenco, and this show is not meant to function as an introduction to it, a clear outline from Paul, Mellado, and the creative team would be helpful. Without one, this Flamenco may not truly be for everybody.

Nevertheless, Flamenco for Everybody is a fun show. The Flamenco community in Australia is small but passionate, and the creative team here do well to express that passion. If one is seeking a unique experience, or a mental vacation to the streets of southern Spain, look no further.