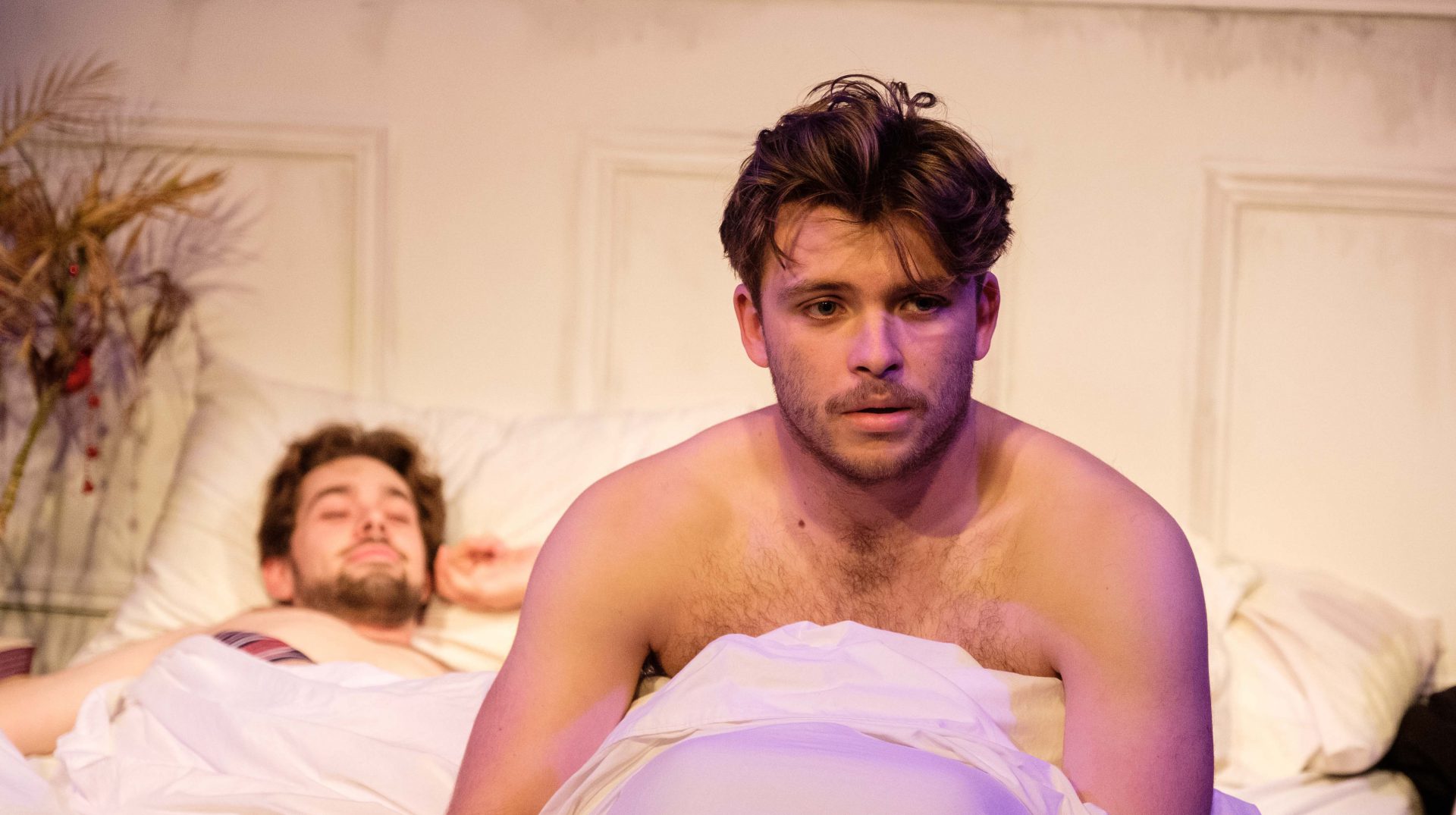 Joy, because queer stories are rare in any performance medium, and queer Australian stories even rarer; fear, because the rarity of those stories, combined with the growing appetite for them by the LGBT+ community, means there’s a lot of pressure for a queer story to be good.

Queer people don’t just want their stories told; they want them told honestly, powerfully, with as much passion as any other story. After all, it’s no less than they deserve.

It is with great joy that I can say Jacob Parker’s latest work, This Genuine Moment, presented as part of the Old 505 Freshworks Program and directed by Hayden Tonazzi, delivers in full. A raw, witty, relevant play, This Genuine Moment is 80 minutes of uplifting spirits and utter heartbreak.

The story follows ‘L’ and ‘R’ the morning after their late-night dance-floor encounter, perfectly capturing the awkward messiness and sensuality of waking up with strangers who aren’t quite strangers anymore. Tom Hughes plays ‘R’, nervous but eager, opposite Jackson Blair-West as ‘L’.

Both performers play their roles well, sharing a great chemistry together, a visceral push-and-pull. Blair-West is at his best in the lighter moments, sassing and teasing ‘R’ to great amusement and also shining in the final, more serious beats of the play.

Hughes, however, is the standout actor. Between his wonderfully natural grasp of the text and dexterous emotional (and physical!) leaps, Hughes is gripping as ‘R’. He is watchable even when just watching ‘L’, and utterly hilarious in the first 5 minutes, which are entirely dialogue-free.

The intimacy between the actors is made all the more tangible through a clever set design by Kate Beere.

A small platform minimises the stage; just large enough to hold the bed where ‘L’ and ‘R’ spend most of their time together. It’s a setting that’s almost nostalgic for a modern-day experience – mattress on the floor, a chipped-paint stool in place of a bedside table, a lamp that doesn’t work, and a poorly neglected house plant ornamented with Christmas decorations. This is the bedroom of a young adult still finding their way in the world, and it draws us in; reminding us of a time that feels far off, but in reality, is not at all distant.

Simple lighting design by Tonazzi compliments Beere’s set, letting daylight flood in and out just as the characters shine and shadow their own stories. Mention must also go to Aron Murray for their highly effective video design, a simple but necessary feature of the play that added humour as well as harsh truth.

Parker has crafted an honest, funny, not always satisfying, but thoroughly engaging play. The story can’t always go the way we want it to, just as ‘L’ and ‘R’ know only too well. But it is what they don’t know – about the world, about each other, and about themselves – that makes this work interesting.

Erin Middleton is an emerging cross-medium writer and actress from South West Sydney. She dabbles in poetry; was a Top 50 Finalist in the NYC Midnight Screenwriting Challenge; and received the 2019 Sydney Scholarship for Faber Writing Academy, where she hopes to complete her first novel. Her short plays have been selected for events such as Siren Theatre Co’s PLAYLIST - Mardi Gras 2019, and her first one-act play is premiering at the Sydney Fringe Festival in 2019. When not writing words herself Erin likes to read them in books, watch foreign language films, and drink hot chocolate.