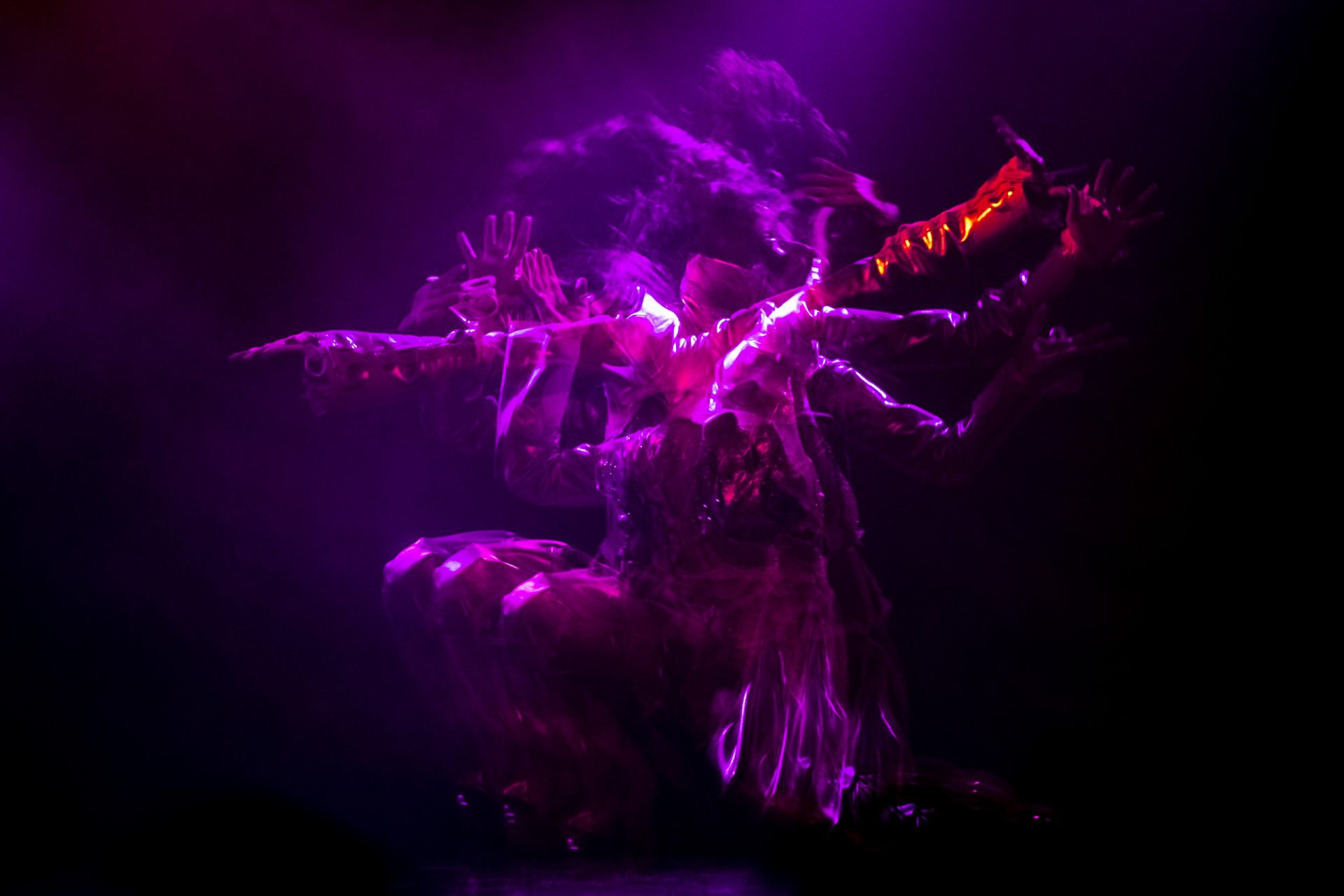 Betty Grumble‘s Enemies of Grooviness Eat Sh!t is a show that is almost impossible to convey in words, much less in the space of a short review. Playing as part of Vivid Sydney, the show only ran from the 14th of June to the 18th. This is a shame for those reading this review now as I have much acclaim to give the show, but those interested may find solace in the fact that Grumble is a prolific artist that has run many shows in Sydney over the years, so I imagine there will be plenty of opportunities to see her in the future.

Enemies of Grooviness is not performed in a dedicated theatre. Instead, it is hosted in Eveleigh Works – the oldest industrial blacksmithing workshop in Australia. Bright lights greet you upon entrance with striking purple, blue and red stage lights giving the otherwise bygone industrial scene an exciting appearance, clearly paying homage to the kind of lighting that Sydney has become known for during Vivid. A DJ performs as we wait for the performance to begin. The crowd suddenly erupts in cheer: Grumble has appeared. She immediately lifts the energy of the audience, who cheer her on and shake recycled plastic-cup-maracas given to them at the entrance. Following an Acknowledgement of Country, Grumble begins by addressing us, referring to us a ‘bodies’, rather than people. The intentional use of this language comes across as strangely dehumanising at first but later makes sense in the context of the show.

There isn’t really a defined ‘narrative’ in the show, coming across instead like a stream of consciousness. With the ‘Guides of Art, Love and Truth’, Annie Sprinkle and Candy Royalle, Grumble shares with us vignettes of her deepest and most personal experiences exploring her journey in finding love within herself, her struggles with domestic violence, the legal system, patriarchal structures in society and establishing her deep connection to feminism and the natural world. The show combines the ‘rage’ energy Grumble feels towards the oppressive elements of society, but this is offset in her sharing glimmers of ‘love energy’ and ‘hope energy’ – giving us a lucid and bleak critique of the world whilst offering a bulwark to those forces in communicating to us a clear path to hope. Enemies of Grooviness explores these ideas in rich ways by harnessing the incredible breadth of Grumble’s artistic talents.

As a performer, Grumbles’ ability to harness performance art, song and dance is nothing short of amazing. She dances well to a variety of musical genres including funk, Latin, techno, experimental, and 80s pop. Her singing shines and her poetry is well-written and delivered. The ideas in Enemies of Grooviness are complimented by the well-done production (credits to Tom Smyth and Performing Lines). Lighting is superb with essentially non-stop lighting effects being used to compliment Grumble’s performance, aided in part by the expansiveness of Eveleigh Works and the number of stage lights that could be situated around the stage. A fog machine is also used in conjunction with the lighting throughout the show to wonderful effect. Finally, costumes play a large part in the show, with Grumble creatively using a number of items and props to craft costumes throughout the show, serving to enhance her character development to a surprisingly large degree. Makeup, including the use of glow in the dark paint, is also used at one point where the lighting is cut-off, creating one of the most incredible dance scenes I’ve seen and paying homage to Sydney’s Vivid. Grumble is occasionally nude, but it never comes across as unnecessary – rather it serves once again to cleverly support her character’s development and thrusts the underlying themes and ideas of the show to greater heights.

All in all, Enemies of Grooviness Eat Sh!t is one of the most unique and wonderful shows I’ve seen. Grumble is a hugely talented artist whose distinct voice and artistic talents cannot be overstated. There is one important caveat and that is the show certainly isn’t for everyone. For one, Grumble does not shy away from making use of nudity and explicit language. Once again, these aspects, whilst tastefully used, mean the show isn’t for those aged under 18. The show may also cause distress to some as the show does contain graphic allusion and discussion of sexual and domestic violence.