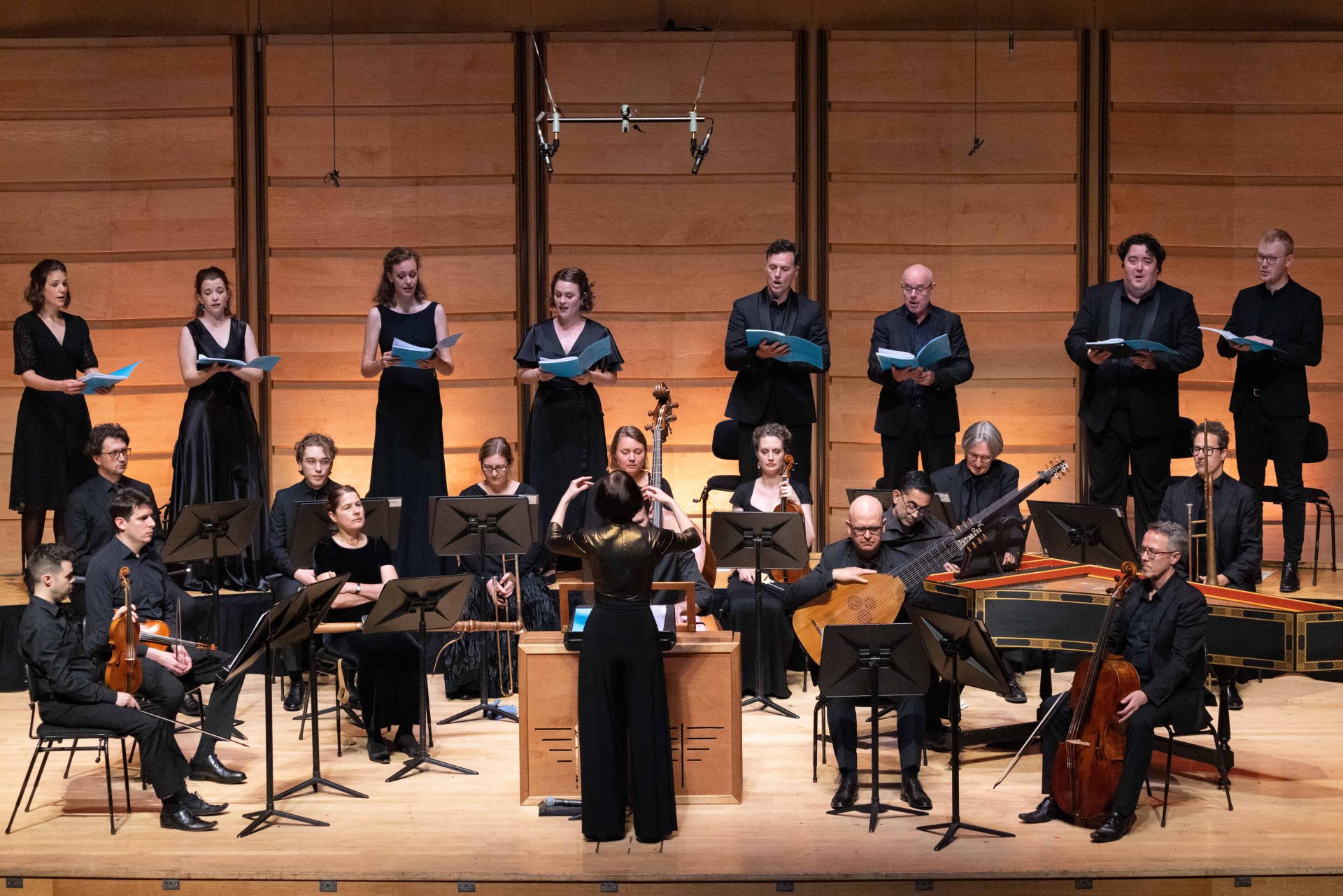 This concert offered something different to Bach Akademie Australia’s usual end-of-year Christmas concerts. Styled as a concert ‘in Thanksgiving’, it featured early choral works premised on exaltation and praise. It was the ensemble’s debut in the City Recital Hall and after a little less than 5 years we get the wonderful sense that the ensemble is really coming into its own.

The concert began with a delightful little brass toccata (or ‘tucket’, as the English called it in the Renaissance) that opened Monteverdi’s Messa a quattro voci da cappella – à la Monteverdi’s L’Orfeo. The ensemble used the three-tiered staging of the City Recital Hall with great effect by placing the trumpets on the highest loft – Monteverdi seemed to have made a similar use of space for the sake of acoustic and dramatic effect in the Santa Maria della Salute. Koen van Stade opened with an admirably clear declaration of the introitus chant. With the Kyrie, the audience immediately gets the impression more of Palestrina than of Monteverdi. The counterpoint is dense, and the voices (much like in a des Prez mass setting) tend to meander sinuously. But what emerged was no thicket of voices. The articulation of each voice was crisp and defined, and Andrew O’Connor’s rich and resounding bass voice stood out immediately, as it did for the rest of the performance. The quality here was like that of a Pinchgut performance, and that is high praise indeed.

The interspersal of instrumental canzone through the mass added a nice dimension. Each piece was tastefully selected by Easton. The first such canzon was Gabrieli’s Canzona due a quattro (1608). The opening sounded much like a similar canzone by Frescobaldi – which goes to show the extent of musical exchange in that period. Despite a few hiccups, this very difficult piece was performed well by all four.

The standout in the continuation of the mass setting was the Crucifixus. Here we see Monteverdi’s unification of musical technique with emotional effect at its finest. It was, much like the Crucifixus (taken from the earlier BWV 12) that was to appear a century later in Bach’s Mass in B Minor, grounded on a descending chromatic fourth. That, coupled with the sheer contrast with the fast-paced preceding music, made for a heart-rending lament. The bass and tenor voices here particularly stood out for their clarity.

The other instrumental piece that appeared in the middle of the mass setting was the seventeenth canzon, entitled ‘La Monteverde’, from Tarquinio Merula’s fourth book of fiery and lively canzone. It gives an equality of voice between violin and cello that was perhaps stark for its time. Danny Yeadon naturally seized that opportunity and gave a characteristically masterful and expressive rendition even of the more difficult running passages. Special mention should also go to Matthew Greco whose performance of this type of early Baroque violin music is always stupendously flawless. Not only is it faultless but it is marked by a shining voice-like expressiveness called for by these spirited canzone.

After a brief interval came Schutz’s Alleluia: Lobet den Herren. The opening, a resounding dance-like declamation of ‘Alleluia’, leaves the audience with no doubt that Schutz was inspired by the seconda prattica style set forth by Monteverdi. Here we have Monteverdi with a distinctly Germanic oomph. The angelic dialogues between sopranos, Susannah Lawergren and Brianna Louwen, were answered by altos Hannah Fraser and Stephanie Dillon exchanging ‘lobet ihn in seinen Taten’. Andrew O’Connor again shone in the later dialogue between basses: ‘Lobet ihn mit Pauken und Reigen’, and Jack Stephens sang with admirable clarity. The voices were nicely positioned opposite each other by Easton to emphasise the sense of dialogue.

But, of course, what would a Bach Akademie concert be without Bach? The selection for this concert was BWV 63 – Christen ätzet diesen Tag. It was particularly fitting, given it was one of Bach’s earliest Christmas cantatas. Easton conducted the opening chorus at a sprightly tempo, which fit well with the text and tone of the piece. Around Bach’s time, the recitative devolved into what Gardiner called the ‘dull patter’ of falling fourths. Not so with Bach. The recitative for alto voice, performed beautifully by Hannah Fraser, is at once dramatic and reflective, and wavers between light and dark – almost a piece unto itself. It ends on something of a question mark, which is answered by a show-stopping aria – Gott, du hast es wohl gefüget. This aria was one of the night’s highlights. The combination of Susannah Lawergren, Andrew O’Connor and Adam Masters on obbligato oboe was utterly breathtaking and each voice intertwined seamlessly with the others. The same could be said of the duet with Stephanie Dillon and Andrew Goodwin, whose sheer clarity never once wavered.

The final chorus is a masterpiece in composition, and its execution here by the Bach Akademie was a masterclass in performance. The introductory section with winds and strings was performed swiftly as a gust of wind – in a way that recalls the use of strings in the final chorale of BWV 138 – which only heightened the dramatic effect when the voices burst out. Bach calls on a variety of styles. We see the voices break out into a reflective stile antico canon that gradually amplifies, and which Easton heightened by calling on softer voices in the beginning. Then we see a rapid change in mood with ‘Dass uns der Satan möge quälen’, which devolves into a mildly slower-paced, almost brooding, chromatic fugue (think BWV 54).

As usual, the Bach Akademie did not disappoint. This was in all respects a world-class performance. Easton and the ensemble clearly invested a lot of thought into it, and it was a fitting way to end their spectacular 2022 season.